Jacqueline Lee Bouvier "Jackie" Kennedy Onassis (July 28, 1929 – May 19, 1994), was the wife of President John F. Kennedy and First Lady of the United States from 1961 until his assassination in 1963. She subsequently married Greek shipping magnate Aristotle Onassis. In later years, she enjoyed a successful career as a book editor.

Her early years were spent in New York City and East Hampton, Long Island, at the Bouvier family estate called "Lasata". She became at a very early age an accomplished equestrienne, a sport that would remain a lifelong passion. As a child, she also enjoyed drawing, reading and writing poems.

Her parents divorced in 1940, and her mother married Standard Oil heir Hugh D. Auchincloss in 1942, with whom she had two children: Janet (1945-1985) and James Auchincloss (b. 1947). She and her sister moved in with their mother's new family, and divided their time between their stepfather's two vast estates: "Merrywood" in McLean, Virginia, and "Hammersmith Farm" in Newport, Rhode Island.

She was educated at selective schools such as Chapin's, Miss Porter's and Vassar College. She spent one year (1949-50) in Paris, France, studying at La Sorbonne, before graduating from George Washington University in 1951, with a Bachelor of Arts in French literature. Other interests included art, history and languages.

After graduation, she worked as an "inquiring-photographer" for the Washington Times-Herald and was sent to London in June 1953 to cover the coronation of Queen Elizabeth II. 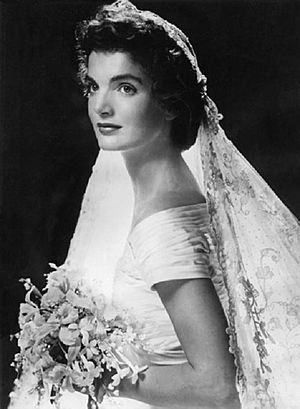 Jacqueline Bouvier and then congressman John F. Kennedy belonged to the same social circle and were introduced by a mutual friend at a dinner party in May 1952. Kennedy was then busy running for the US Senate, but after his election in November, the relationship grew more serious and led to a proposal.

The wedding took place on September 12, 1953, at St Mary's Church, in Newport, Rhode Island, and was considered the social event of the season with an estimated 800 guests at the ceremony and 1000 at the lavish reception that followed at "Hammersmith Farm".

Behind all the glamour, however, the couple had to face several personal setbacks. John Kennedy had serious health problems unknown to the public. He suffered from Addison's disease and from chronic and debilitating back pain due to a war injury. During the fall and winter of 1954, he underwent two delicate spinal operations which almost killed him. 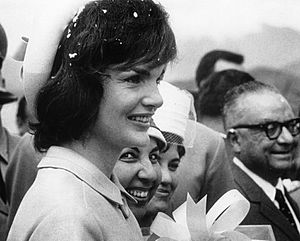 Jacqueline Kennedy in Venezuela during December 1961 trip to South America

When John Kennedy became the 35th president of the United States, on January 20, 1961, Jacqueline Kennedy became, at age 31, one of the youngest First Ladies in American history. Young, attractive and cultivated, she quickly became extremely popular both at home and abroad and was often simply known as "Jackie" by the public.

After moving into the White House, she was dismayed at the state the official residence was in. She established a Fine Arts Committee to help her restore the house to its original splendor with American furniture, paintings and objets d'art of historical significance. She had a booklet on the history of the house published to help finance the restoration and hosted an immensely popular televised tour of the White House, on February 14, 1962, to show the progress of the work. She also redesigned the White House East Garden, which now bears her name, and through her intervention, historic buildings were saved from demolition in Lafayette Square.

On the international scene, she accompanied President Kennedy on state visits to Canada, Europe, Central and South America, where her knowledge of art and history and her skill at languages served her well. She made a very successful and highly publicized goodwill trip to India and Pakistan in March 1962, accompanied by her sister Lee Radziwill.

On November 22, 1963, while on a pre-electoral visit in Dallas, Texas, with President Kennedy, she was seated next to him in an open limousine driving through the city when he was shot in the head by a sniper. The courage and dignity she displayed in the aftermath of that tragedy won her international admiration. 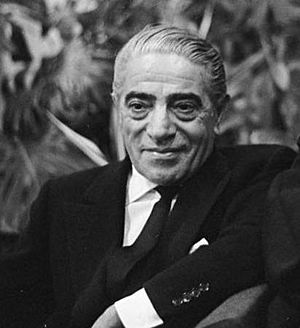 After leaving the White House, Jacqueline Kennedy lived for a time in Georgetown, Washington, D.C., but moved to New York City with her children in late 1964. She attended occasional memorials for her late husband and helped supervise the plans for the John F. Kennedy Library in Boston. She made semi-official trips to England, Ireland and Cambodia.

On October 20, 1968, she married Greek shipping magnate Aristotle Onassis, 23 years her senior. After his death in 1975, she once more settled in New York City where she worked as a book editor for the last two decades of her life, first for Viking Press and later for Doubleday. She also took an active part in a campaign to preserve New York City's Grand Central Terminal.

Her last years were spent quietly mostly in the company of her family and longtime companion Maurice Templesman.

Jacqueline Kennedy Onassis died of cancer (lymphoma) at her home in New York City, at the age of 64. She was buried at Arlington National Cemetery in Virginia, next to President Kennedy, their stillborn daughter and infant son.

All content from Kiddle encyclopedia articles (including the article images and facts) can be freely used under Attribution-ShareAlike license, unless stated otherwise. Cite this article:
Jacqueline Kennedy Onassis Facts for Kids. Kiddle Encyclopedia.