The John F. Kennedy Presidential Library and Museum is the presidential library and museum of John Fitzgerald Kennedy, (1917-1963), the 35th President of the United States (1961–1963). It is located on Columbia Point in the Dorchester neighborhood of Boston, Massachusetts, next to the University of Massachusetts at Boston, the Edward M. Kennedy Institute for the United States Senate, and the Massachusetts Archives and Commonwealth Museum. Designed by the architect I. M. Pei, the building is the official repository for original papers and correspondence of the Kennedy Administration, as well as special bodies of published and unpublished materials, such as books and papers by and about Ernest Hemingway.

Every United States President since Hervert Hoover (1929-1933) has had a Presidential Library established after his service. All are run in conjunction with the National Archives, to house various records and documents pertaining to a given president's term(s). The Kennedy Library is the only Presidential library in New England, commemorating the first US President of Irish and/or Roman Catholic background.

The library and Museum were dedicated in 1979 by 39th President Jimmy Carter and members of the Kennedy family. It can be reached from nearby Interstate 93 or via shuttle bus or walk from the JFK/UMass stop on the Boston Subway's Red Line. 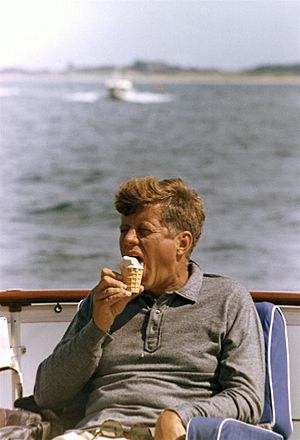 The official dedication was held on October 20, 1979. Outside the building on the green, on a blue-carpeted stage with a bank of yellow chrysanthemums sat the Kennedy family and those close to them. Among many others, President Jimmy Carter was in their company. The ceremony began with President Kennedy's daughter, Caroline Kennedy, introducing her brother, John F. Kennedy, Jr., who read from the Stephen Spender poem, I Think Continually of Those Who Were Truly Great.

President Carter said of John F. Kennedy that he embodied "the ideals of a generation as few public figures have ever done in the history of the earth." Afterwards, he accepted the library "on behalf of the American people" and the National Archives and Records Administration.

Senator Edward M. Kennedy, said of his brother's life, that it "was a voyage of discovery, a quest for excellence that inspired universal trust and faith. In that brief unfinished journey, he made us believe once more in the great historic purpose of this land. He filled America with pride and made the nation young again."

The library's first floor features a museum containing video monitors, family photographs, political memorabilia. Visitors to the museum begin their visit by watching a film narrated by President Kennedy in one of two cinemas that show an orientation film, and a third shows a documentary on the Cuban Missile Crisis.

The are seven permanent exhibits: 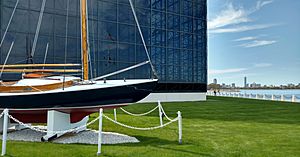 The sailboat Victura and the exterior of the Library

Kennedy's 25-foot Wianno Senior sailboat Victura is on display on the grounds of the Library from May to October. Acquired by the family when Kennedy was 15, it played an important role in forging sibling bonds and, after the president's death, continued being sailed by other members of the family, especially race-enthusiast brother Ted.

All content from Kiddle encyclopedia articles (including the article images and facts) can be freely used under Attribution-ShareAlike license, unless stated otherwise. Cite this article:
John F. Kennedy Presidential Library and Museum Facts for Kids. Kiddle Encyclopedia.