Air Force One facts for kids 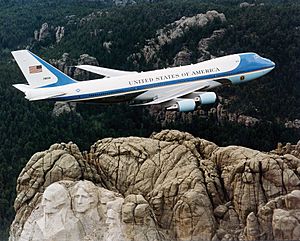 Air Force One over the Mt. Rushmore

Air Force One is the air traffic call sign (name) of any Air Force aircraft being used by the President of the United States.

The president usually flies in one of the two specially changed Boeing 747 Jumbo Jets (airplane) kept by the United States Air Force.

When Richard Nixon resigned as President in 1974 he flew back to his home in California in Air Force One, but halfway to California he stopped being President and the airplane was then given a new name.

All content from Kiddle encyclopedia articles (including the article images and facts) can be freely used under Attribution-ShareAlike license, unless stated otherwise. Cite this article:
Air Force One Facts for Kids. Kiddle Encyclopedia.