Casablanca is Morocco's chief port and one of the largest financial centers on the continent. The 2012 census (adjusted with recent numbers) recorded a population of about 4 million in the prefecture of Casablanca. Casablanca is considered the economic and business center of Morocco, although the national political capital is Rabat.

The original name of the city was Anfa, in Berber language, by at least the seventh century BC. After the Portuguese took control of Anfa in the 15th century AD, they rebuilt it, changing the name to Casa Branca. It derives from the Portuguese word combination meaning "White House" (branca "white", casa "house"). The present name, which is the Spanish version, came when the Portuguese kingdom was integrated to the Spanish kingdom. During the French protectorate in Morocco, the name remained Casablanca. In the 18th century, an earthquake destroyed most of the town. It was rebuilt by the Sultan who changed the name into the local Arabic which is A-ddar Al Baidaa, although Arabic also has its own version of Casablanca (كازابلانكا, Kāzāblānkā). The city is still nicknamed Casa by many locals and outsiders to the city. In many other cities with a different dialect, it is called A-ddar Al-Bida, instead.

A famous boulevard inside Casablanca City is called "Anfa Boulevard". Anfa is generally considered the early "old original city" of Casablanca; it is legally a prefecture (district) with half a million city inhabitants.

Casablanca is located in the Chawiya Plain which has historically been the breadbasket of Morocco. Apart from the Atlantic coast, the Bouskoura forest is the only natural attraction in the city. The forest was planted in the 20th century and consists mostly of eucalyptus, palm, and pine trees. It is located halfway to the city's international airport.

The only watercourse in Casablanca is oued Bouskoura, a small seasonal creek that until 1912 reached the Atlantic Ocean near the actual port. Most of oued Bouskoura's bed has been covered due to urbanization and only the part south of El Jadida road can now be seen. The closest permanent river to Casablanca is Oum Rabia, 70 km (43.50 mi) to the south-east.

Casablanca has a warm summer Mediterranean climate (Köppen climate classification Csa). The cool Canary Current off the Atlantic coast moderates temperature variation, which results in a climate remarkably similar to that of coastal Los Angeles, with similar temperature ranges. The city has an annual average of 72 days with significant precipitation, which amounts to 412 mm (16.2 in) per year. The highest and lowest temperatures ever recorded in the city are 40.5 °C (104.9 °F) and −2.7 °C (27.1 °F), respectively. The highest amount of rainfall recorded in a single day is 178 mm (7.0 in) on 30 November 2010.

The French period Ville Nouvelle (New Town) of Casablanca was designed by the French architect Henri Prost, and was a model of a new town at that time. The main streets radiate south and east from Place des Nations Unies, previously the main market of Anfa. Former administrative buildings and modern hotels populate the area. Their style is a combination of Hispano-Moorish and Art Deco.

Casablanca is home to the Hassan II Mosque, designed by the French architect Michel Pinseau. It is situated on a promontory on the Atlantic Ocean. The mosque has room for 25,000 worshippers inside, and a further 80,000 can be accommodated in the mosque's courtyard. Its minaret is the world's tallest at 210 metres (690 feet). The mosque is also the largest in North Africa, and the third-largest in the world.

Work on the mosque started in 1980, and was intended to be completed for the 60th birthday of the former Moroccan king, Hassan II, in 1989. However, the building was not inaugurated until 1993. Authorities spent an estimated $800 million in the construction of the building.

The Parc de la Ligue Arabe (formally called Lyautey) is the city's largest public park. On its edge is the Casablanca Cathedral (Cathédrale Sacré-Coeur). It is no longer in use for religious purposes, but it is open to visitors and a splendid example of Mauresque architecture. The Old Medina (the part of town antedating the French protectorate) attracts fewer tourists than the medinas of cities such as Fes and Marrakech. However, it has undergone some restoration in recent years. Included in this project have been the western walls of the medina, its skala, or bastion, and its colonial-period clock tower.

A popular site among locals is the small island Marabout de Sidi Abderrahmane. It is possible to walk across to the rocky island at low tide. This outcrop contains the tomb of Sidi Abderrhamane Thaalibi, a Sufi from Baghdad and the founder of Algiers. He is considered a saint in Morocco. Because of this, many Moroccans make informal pilgrimages to this site "to reflect on life and to seek religious enlightenment". Some believe that the saint possessed magical powers, so his tomb still possesses these powers. People come and seek this magic to be cured. Non-Muslims may not enter the shrine. 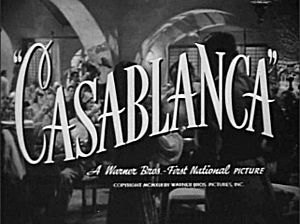 All content from Kiddle encyclopedia articles (including the article images and facts) can be freely used under Attribution-ShareAlike license, unless stated otherwise. Cite this article:
Casablanca Facts for Kids. Kiddle Encyclopedia.