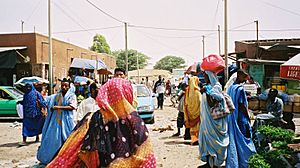 Nouakchott (Arabic: نواكشوط or انواكشوط‎code: ar is deprecated ) is the capital city of the African county of Mauritania. It is the largest city in that country and one of the largest cities on the Sahara Desert. The city is the administrative and economic centre of Mauritania. The Arabic name is said to mean "The place of winds" in the language of the Berber people.

The city is often a place where the urban Mauritanians and the nomadic people of the area can interact.

The population of Nouakchott is about 881,000 people. It is hard to know exactly how many people live in the city because many of them are nomadic. They find a good place to live, set up their tent for a short time and then move to somewhere else.

Although Islam is the state religion in Mauritania, Nouakchott includes the Cathedral of St. Joseph, a Catholic cathedral.

Nouakchott has a deep-sea port. It was opened in 1986. The port is mainly used for imports. The city also features an international airport. The city is home to the Université de Nouakchott. It is the only university in Mauritania. Things to see in Nouakchott include Nouakchott Museum, several markets including Nouakchott Silver Market, and the beaches.

Nouakchott has very little history. It was a tiny fishing town until 1958. It is possible that the Berber Muslim Almoravids came from the area. The city was selected as the capital city for its mild climate and its location near the center of the country.

Mauritania was part of the larger French colony of French West Africa. During that time, Saint-Louis, in Senegal was the capital. In 1957, this small port town was chosen to be the capital of the new country. A building program was begun to grow its population to 15,000. In 1962, Nouakchott became the capital of an independent country.

The city has much growth. Because of the north African drought since the beginning of the 1970s many people have moved to the city.

Nouakchott is located on the Atlantic coast of the Sahara Desert. The city is very spread out. It has only a few tall buildings.

Nouakchott is built around a large tree-lined street, Avenue Abd an-Nasir. This street runs northeast through the city center from the airport. Other major streets are named (in French) for notable Mauritanian people, or international people of the 1960s: Avenue de Gaulle, Avenue Kennedy, and Avenue Lumumba, for example.

All content from Kiddle encyclopedia articles (including the article images and facts) can be freely used under Attribution-ShareAlike license, unless stated otherwise. Cite this article:
Nouakchott Facts for Kids. Kiddle Encyclopedia.