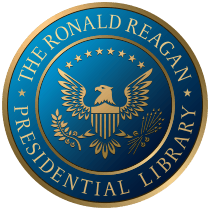 The Seal of the Ronald Reagan Presidential Library

A larger scale of the library

The library is located in Simi Valley, California. The Reagan Library is the largest of the thirteen federally operated presidential libraries. The street address, 40 Presidential Drive, is numbered in honor of Reagan's place as the 40th President.

Construction plans for the library included to build a tomb for the eventual use of Reagan and Nancy. Following a sunset service on the library grounds the last evening, on the morning of June 12, 2004 Reagan was laid to rest in the underground vault. Nancy Reagan, who died on March 6, 2016, was buried at the library next to her husband on March 11.

All content from Kiddle encyclopedia articles (including the article images and facts) can be freely used under Attribution-ShareAlike license, unless stated otherwise. Cite this article:
Ronald Reagan Presidential Library Facts for Kids. Kiddle Encyclopedia.