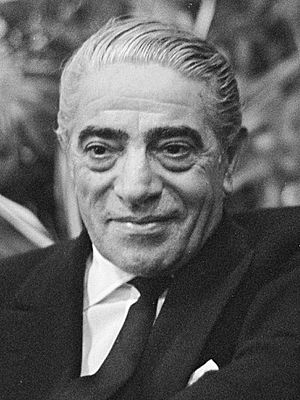 Onassis was born in Smyrna (now Izmir), Ottoman Empire, into a prosperous Greek family. He received a good education and became fluent in several languages. In 1922, when Turkey took possession of Smyrna, the Onassis family lost most of their fortune and had to flee to Greece. The following year, Onassis left for Argentina where he quickly established himself as a prominent businessman.

He later began to invest in shipping and eventually acquired a large fleet of freighters which made him one of the richest men in the world. In 1957, he founded Olympic Airways. He converted one of his ships into a luxury yacht called Christina, which he used to entertain famous people (artists, politicians, royalty, etc.).

He died at American Hospital of Paris in Neuilly-sur-Seine, France, from complications of myasthenia gravis and pneumonia, aged 69.

All content from Kiddle encyclopedia articles (including the article images and facts) can be freely used under Attribution-ShareAlike license, unless stated otherwise. Cite this article:
Aristotle Onassis Facts for Kids. Kiddle Encyclopedia.