Christina Onassis (Greek: Χριστίνα Ωνάση; 11 December 1950 – 19 November 1988) was an American-born, Greek businesswoman, socialite, and heiress to the Onassis fortune. She was the only daughter of Aristotle Onassis and Athina Livanos.

Christina Onassis, the only daughter of the Greek Argentine shipping magnate Aristotle Onassis and his first wife, Athina Livanos, was born in New York City at LeRoy Sanitarium. Her maternal grandfather was Stavros G. Livanos, founder of the Livanos shipping empire. Onassis had an older brother, Alexander. She and Alexander were raised and educated in France, Greece, and England. She attended the Headington School in Oxford and Queen's College, London from 1968 to 1969. 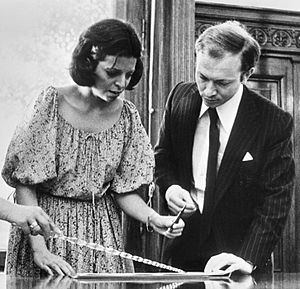 Marriage of Christina Onassis and Sergei Kauzov on 2 August 1978

Upon Alexander's death, Aristotle Onassis began grooming his daughter to take over the family business. She was sent to New York City to work in his office. After Aristotle's death, she inherited 55% of his fortune, then estimated to be worth $500 million. The remaining 45% funded a foundation established in Alexander's memory, the Alexander S. Onassis Foundation. After a legal settlement, Jacqueline Kennedy Onassis received $26 million from the estate. Christina was the focus of her father's attention until his death; he considered her his successor and trained her in the business operations of the Onassis business empire. She carried the mantle of the Onassis shipping empire, successfully running the business after her father's death.

Christina died in Buenos Aires from a heart attack. She was aged 37. Her heart attack was caused by pulmonary edema.

Onassis willed her fortune, worth an estimated $250 million at the time of her death, to her only child, Athina.

All content from Kiddle encyclopedia articles (including the article images and facts) can be freely used under Attribution-ShareAlike license, unless stated otherwise. Cite this article:
Christina Onassis Facts for Kids. Kiddle Encyclopedia.