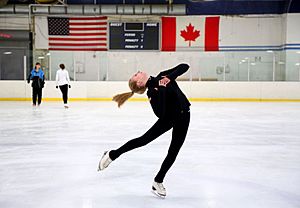 A figure skater pictured at the Clearwater Ice Arena

Clearwater is a city located in Pinellas County, Florida, United States, northwest of Tampa and St. Petersburg. To the west of Clearwater lies the Gulf of Mexico and to the southeast lies Tampa Bay. As of the 2010 census, the city had a population of 107,685. It is the county seat of Pinellas County. Clearwater is the smallest of the three principal cities in the Tampa-St. Petersburg-Clearwater metropolitan area, most commonly referred to as the Tampa Bay Area.

Cleveland Street is one of the city's historic avenues and the city includes Spectrum Field and Coachman Park. The city is separated by the Intracoastal Waterway from Clearwater Beach.

Clearwater is the home of Clearwater Marine Aquarium, where bottlenose dolphins Winter and Hope live.

Clearwater is the "worldwide spiritual headquarters" for the Church of Scientology. 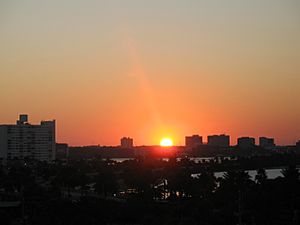 Clearwater at daybreak, as seen from Clearwater Beach

Present-day Clearwater was originally the home of the Tocobaga people. Around 1835, the United States Army began construction of Fort Harrison, named after William Henry Harrison, as an outpost during the Seminole Wars. The fort was located on a bluff overlooking Clearwater Harbor, which later became part of an early 20th-century residential development called Harbor Oaks. University of South Florida archaeologists excavated the site in 1962 after Mark Wyllie discovered an under ground ammunition bunker while planting a tree in his yard.

The area's population grew after the Federal Armed Occupation Act of 1842 offered 160 acres (0.65 km2) to anyone who would bear arms and cultivate the land. Early settlers included the Stevens, Stevenson, Sever and McMullen families, who claimed and farmed large tracts of land. Prior to 1906, the area was known as Clear Water Harbor. The name "Clear Water" is thought to have come from a fresh water spring flowing from near where the City Hall building is located today. There were many other freshwater springs that dotted the bluff, many in the bay or harbor itself. 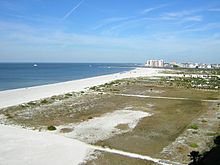 Originally part of Hillsborough County, the first road joining Clearwater and Tampa was built in 1849, which dramatically reduced the prior day-long commute between the cities.

During the American Civil War, Union gunboats repeatedly raided the community's supplies, as most of the able-bodied men were away fighting for the Confederate Army. The town began developing in the late nineteenth century, prompted by Peter Demens' completion of the first passenger railroad line into the city in 1888. Clearwater was incorporated in 1891, with James E. Crane becoming the first mayor. The area's popularity as a vacation destination grew after railroad magnate Henry B. Plant built a sprawling Victorian resort hotel named Belleview Biltmore just south of Clearwater in 1897. 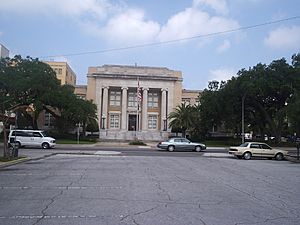 By the early 1900s, Clearwater's population had grown to around 400, ballooning to nearly 1,000 in the winter. Clearwater's oldest existing newspaper, the Clearwater Sun, was first published on March 14, 1914. Clearwater was reincorporated, this time as a city, on May 27, 1915, and was designated the county seat for Pinellas County, which broke from Hillsborough County in 1912. In 1915, a bridge was built across Clearwater Harbor, joining the city with Clearwater Beach to the west. Clearwater Beach, although located on a separate barrier island, belongs to the city of Clearwater and fronts the Gulf of Mexico. A new, much higher bridge now arcs over the bay, replacing the former drawbridge; the connecting road is part of State Road 60 and is called Clearwater Memorial Causeway.

During World War II, Clearwater became a major training base for US troops destined for Europe and the Pacific. Virtually every hotel in the area, including the Belleview Biltmore and the Fort Harrison Hotel, was used as a barracks for new recruits. Vehicle traffic was regularly stopped for companies of soldiers marching through downtown, and nighttime blackouts to confuse potential enemy bombers were common practice. The remote and isolated Dan's Island, now the highrise-dominated Sand Key, was used as a target by U.S. Army Air Corps fighter-bombers for strafing and bombing practice.

Clearwater's downtown has been undergoing major redevelopment in recent years. General beautification has been done along with completion of several high-rise condos and a large marina. New bars, restaurants and other amenities are coming to the area, renamed the "Cleveland Street District". Royalty Theatre is also slated to be renovated. Another feature is Coachman Park which hosts events throughout the year. The downtown core is approximately 2 miles (3 km) from Clearwater Beach and 6 miles (10 km) from downtown Dunedin. The drive to both places, and many parts of downtown itself, feature views of the water and the Clearwater Memorial Causeway.

Clearwater, in common with the majority of the South, has a humid subtropical climate 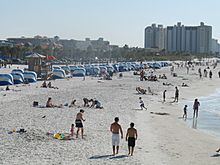 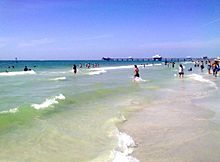 The Clearwater Public Art and Design Program, adopted by City Council in 2005, is funded through a 1% allocation on all city capital improvement projects valued at more than $500,000. The program commissions an average of 2-3 new projects per year.

Donald Roebling was a frequent patron, having his own double seat installed at the theatre.

The theatre was managed by various movie companies (EJ Sparks, Paramount, ABC-Southeastern Theatres, and Plitt Southern) and played the most recent movies of the day. The theatre also offered vaudeville on Friday nights in the 1930s. Headliners included Sally Rand, Fred Stone and his daughter, and Lum and Abner (of radio). The theatre was renovated in 1962. The Robert Morton Wicks Opus 415 was most likely removed during this renovation. When Plitt Southern did not renew their contract in 1979, Bill Neville and Jerry Strain tried to save the theatre with film classics and reduced prices. However, the theatre closed its doors on October 28, 1980.

Royalty Theater Company signed leases with the Taylor family in February 1981 when it then became known as the Royalty Theater (Clearwater, Florida). The building was renovated with Ron Winter of Winter Associates as the contractor and Scott Musheff as the architect.

The theatre remained in the Taylor family estate until it was sold in 1996. In July 2008 the building went into foreclosure.

In January 2009, the City of Clearwater and Ruth Eckerd Hall joined forces to purchase the theater (renamed Capitol Theater) as well as the neighboring Pat Lokey building. They plan to renovate and revitalize the historic Capitol Theater.

In 1911, the city of Clearwater witnessed a vast population increase as well as acquiring telephones, electricity, paved streets, and an ice factory. It is during this time that the Clearwater Library Association opened a subscription library on the second floor of the local People's Bank. Its popularity and support led to the request of $10,000 from the Carnegie Foundation to build a public library. Support for the building of cultural institutions, the library in particular, had the strong backing of the Clearwater community. A January 8, 1914 editorial in the Clearwater News illustrates the sentiment of the local community towards its new library: "Support the Library...One of the finest assets a town can possibly have is a good library...None will help make for a successful and happy community in the future as a good library. Already started is a collection of books, which could be made to serve as a nucleus for a larger and free public library - one owned by the town...(It is) a matter of civic pride. A public library, free to all the home people, ministering to their special wants and needs, is no longer considered a luxury, it is fast becoming a necessity to all progressive communities, and Clearwater should not be behind her sister towns; it can and should become a leader." This request was approved. The city of Clearwater only had to provide a location and continued maintenance for this facility. In May 1915, a referendum was approved by City Ordinance 154 to provide for the creation and maintenance of a public library. The city of Clearwater's Mayor and Town Council approved "Clearwater Public Library" and accepted the donation. The building was designed by Tampa architect F.J. Kennard. In its first year, the library had over 1,277 visitors and 2,792 books borrowed. As a vacation town, the library provided free access to materials for all residents and winter visitors.

During the Depression, the Clearwater Public Library faced many of the same threats seen at other libraries seen throughout the United States. This includes increased patron usage and dwindling budget.

In the 1940s, the Clearwater library increased its staff from just three assistants to five assistants. The library's collection also grew from 18,047 to over 100,000. To account for this great increase, the Librarian and Board President Traver Bayly made an appeal to the City Commission for additional space. This appeal was approved and the library extended to include a drive-through, museum, and increased collections.

As a result of segregation, the Clearwater Public Library was for white patrons only from its founding in 1911 to the mid-twentieth century. In 1950, the City Commission agreed to the building of the North Greenwood library. Designed by Architect Eugene Beach, the new library access to many information sources to the city's African Americans population. This library was renovated in 1984. Clearwater Main library was rebuilt in 2000.

As the population continued to increase throughout the late twentieth century, the library system continued to grow. The Clearwater Public Library System now includes five libraries: Clearwater Main, Countryside, North Greenwood, Beach, and East. In recent years, the Clearwater Public Library System has become increasingly digital providing patrons with access to computers, online databases, and an online library catalog. This was made possible by the Greater Clearwater Public Library Foundation, Inc. which formed in 1984. Currently, as a part of the library's Centennial Celebration, a project is commencing to add makerspaces to the libraries. The Main library's makerspace is the "Studio's at Main" and targets creative arts making.

The Clearwater Public Library System is a contributor to the Pinellas Memory Project.

Jenifer Obermaier is the current director of the Clearwater Public Library System. This system of libraries is part of the Pinellas Public Library Cooperative which seeks to provide all patrons with access to information and programs to benefit the community.

Moccasin Lake Nature Park is a 51-acre nature preserve with a 5-acre lake that is owned and operated by the city. The preserve also features the Moccasin Lake Environmental Education Center, which offers environmental education classes, programs and camps. The Center features live rehabilitated birds of prey, reptiles, amphibians and aquatic wildlife. It opened in 1982. The City of Clearwater contains five pools: Ross Norton, North Greenwood, Morningside, the Longcenter, and Clearwater Beach. Swim lessons are offered throughout the year to patrons, and the pools have both a recreation summer pool league and the Clearwater Aquatics Team. These pools have participated in the World's Largest Swim Lesson.

One of PSTA's transfer hubs, Park Street Terminal, is located in downtown Clearwater.

U.S. Route 19 is by far the area's most heavily traveled road, some parts of it carrying nearly 100,000 vehicles per day. It is a limited-access highway for a majority of its length in Clearwater, with an exception being the portion between Druid Road and Haines Bayshore Road. Plans are underway to develop this piece to freeway standards, however. 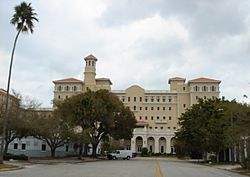 Beginning in the 1970s under the code-name Project Normandy, Scientology began targeting Clearwater in order to "establish area control" of the city and county. The operations were exposed in a Pulitzer Prize winning series of articles in the Clearwater Sun.

Gabe Cazares, who was the mayor of Clearwater at the time, went so far as to call it "the occupation of Clearwater" and later characterized it as a "paramilitary operation by a terrorist group." The Church of Scientology targeted Cazares, attempting to entrap him. Cazares and his wife sued the Church of Scientology for $1.5 million. The church settled with Cazares in 1986.

The Church of Scientology's headquarters are located in downtown Clearwater. The Church refers to Clearwater as their "Flag Land Base."

Clearwater has city partnerships with the following cities:

All content from Kiddle encyclopedia articles (including the article images and facts) can be freely used under Attribution-ShareAlike license, unless stated otherwise. Cite this article:
Clearwater, Florida Facts for Kids. Kiddle Encyclopedia.