Clearwater Marine Aquarium is a 501(c)(3) non-profit organization, and aquarium in Clearwater, Florida. It is dedicated to the rescue, rehabilitation and release of sick and injured marine animals, public education, conservation, and research.

Clearwater Marine Aquarium opened in 1972 at its current location on Clearwater Beach, in a former water treatment plant (the large pools being well-suited for rehabilitation operations).

Numerous forms of marine life are permanent residents at the aquarium, all of which have serious injuries that prevent their return to the wild.

The aquarium's best-known permanent resident is Winter, a bottlenose dolphin who was rescued in December 2005 after having her tail caught in a crab trap. Her injuries caused the loss of her tail, and the aquarium fitted her with a prosthetic tail which brought worldwide attention to the facility. Winter later starred in the 2011 film, Dolphin Tale, and the sequel, Dolphin Tale 2, shot partially on location at the aquarium.

In 1972, a group of private volunteers decided it was time to establish a permanent marine biology learning center in the Clearwater area. They were incorporated as a 501(c)(3) nonprofit organization under the name Clearwater Marine Science Center (CMSC). In 1978, the city of Clearwater agreed to donate the aquarium's current facility, an abandoned water treatment plant, to CMSC. With its huge holding pools and bayside location, the building was a perfect fit for a marine facility's needs. In 1979, marine biologist Dennis Kellenberger was hired as CMSC's Executive Director. Kellenberger's main duties were teaching summer camp classes for children and spearheading a massive remodeling effort of the facility. Gradually, the cement and steel building was modified for aquarium purposes and in 1980 was granted a USDA Research Facility permit, allowing it to prepare two 65,000 gallon pools for the rehabilitation of dolphins and sea turtles. In 1981, the first exhibit room was opened to the public. The room featured old exhibits from the Sea-Orama, a mounted fish exhibit which was formerly on display at the Clearwater Marina. Over the next few years, thanks to individual and corporate donations and immense volunteer efforts, CMSC continued to grow. In 1984, CMSC rescued a stranded Atlantic bottlenose dolphin named "Sunset Sam." This was the first dolphin in Florida to survive a beaching. However, due to chronic liver problems, Sunset could not be released into the wild and became CMSC's first resident dolphin. Sunset Sam was taught how to paint as a form of animal enrichment, and the sales of his paintings were used to fund the CMSC's operations and stranding program. In the 1990s, as renovations continued to provide more public area and education programs, the facility's name was changed to Clearwater Marine Aquarium (CMA) to reflect the increasing level of community interaction. In 2005, CMA's most famous permanent resident, a bottlenose dolphin named Winter, was rescued by CMA after being discovered entangled in the ropes of a crab trap. The ropes cut off the blood supply to the dolphin's tail, and resulted in its loss. To give Winter the ability to swim normally, CMA worked with a team of experts to create a prosthetic silicone and plastic tail for her. Winter's story brought international recognition to CMA and inspired two major films, Dolphin Tale and Dolphin Tale 2, each of which was partially filmed at the aquarium.

During the 2020 COVID-19 Pandemic, the Clearwater Marine Aquarium is offering a variety of free educational materials for teachers and parents. First, if you follow their Facebook account, you can learn about different animals at the aquarium at 11:30am daily. Second, there is free downloadable curriculum on their website, available for Grades 1-5. There is a variety of worksheets for each grade level in subjects such as language arts, mathematics, and science. You can also find fun arts and crafts to do with children also. Finally, there are Live Cameras set up throughout the aquarium, where you can observe behaviors and visit with the animals.

Winter, the most famous aquarium resident, is a female Atlantic bottlenose dolphin who was rescued in 2005 by Clearwater Marine Aquarium team members and others after being found caught in a crab trap. She lost her tail due to her injuries. Winter developed a way to swim without a tail in an unnatural side to side motion, but because this was damaging her spinal cord, a prosthetic tail was made especially for her by Kevin Carroll and a team of experts from Hanger, Inc.. Winter starred in the 2011 movie Dolphin Tale and the 2014 sequel Dolphin Tale 2, which was inspired by her story and the sequel inspired on Hope's story. She currently resides in the "Winter Zone" along with another female dolphin named Hope.

Hope is a resident dolphin at CMA. In December 2010, she was discovered in the shallows of Indian River Lagoon as an orphaned 2-month-old calf, still attempting to nurse from her mother, who had died after becoming beached. It was ultimately determined that Hope did not make a good candidate for release because she was very young and had not learned the necessary survival skills to be out in the wild. Hope currently resides in the same area as Winter, and co-starred in Dolphin Tale 2, a sequel to the original movie which dramatized her rescue. 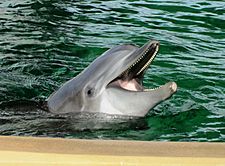 Nicholas is an Atlantic bottlenose dolphin. For many years, he was the only male dolphin currently residing at CMA. On December 24, 2002, he was rescued with his mother as a 6-month-old calf after both became stranded near Gibsonton, Florida. The mother dolphin died three days later due to respiratory illness. Nicholas remained in critical condition, suffering both from malnourishment and severe sunburns which covered over thirty percent of his body. CMA provided 24-hour care for Nicholas for several months, bottlefeeding him and providing wound care. Nicholas was eventually weaned by the animal care staff at CMA, and his wounds completely healed. Like Hope, it was determined that Nicholas did not make a suitable candidate for release because of his dependent status at the time of his stranding and rehabilitation. He lacks the necessary survival skills, which he could only learn from his mother, to survive in the wild. Nicholas lives in his own pool on the aquarium's "Stranding Deck". Nicholas featured briefly in the movie Dolphin Tale, playing a female dolphin alongside Panama named Christa. He appears in Dolphin Tale 2, portraying Mandy.

PJ is a female Atlantic bottlenose dolphin who was rescued in August 2018. At approximately 30 years old, she is currently the oldest of the rescued dolphins at CMA. PJ was found in shallow water in Old Tampa Bay. Although she recovered well, she was demed unreleasable due to numerous medical issues, including hearing and vision loss, worn teeth, and arthritis. She lives together with Winter and Hope.

Hemingway is a male Atlantic bottlenose dolphin who was found stranded at Fiesta Key, Florida in 2019. After receiving treatment at SeaWorld, he was transferred to the Clearwater Marine Aquarium. Hemingway, who is estimated to be 26 years old, became a permanent resident at CMA due to health issues and hearing loss.

Rex and Rudolph are the aquarium's first rough-toothed dolphins. Rudolph is a juvenile male who stranded off Sanibel Island in late 2019. He became a permanent resident because he did not have the hearing range required for echolocation. Rex was discovered on St. George Island in April of 2019; he is about 5-7 years old. Because of significant hearing loss, Rex eventually became a permanent resident at the Clearwater Marine Aquarium.

The aquarium is home to one fully-grown nurse shark, Thelma. A private collector illegally took the shark out of the wild as young pups. When the Thelma outgrew her tank, the collector could no longer care for her and donated Thelma to CMA. At the aquarium, she shares an exhibit with hogfish, red drum, gag grouper, mangrove snapper, black sea bass, common snook, pinfish, red grouper, lookdown, and white grunt.

Clearwater Marine Aquarium currently has one loggerhead, seven green sea turtles, and three Kemp's ridley sea turtles. Many of them were rescued by CMA after being hit by boats, entangled in fishing line, or sustaining other permanent injuries that prevent their return to the wild. They permanently reside in the "Turtle Cove", "Turtle Bayou", and "Mavis's Hideaway" exhibits.

The aquarium currently has two North American river otters. Walle was rescued from the wild as an orphaned pup by a private individual, and was transferred to CMA after becoming too dependent on humans. He currently resides in the Otter Oasis exhibit at Clearwater Marine Aquarium. Walle has a new friend Boomer who has come to the Aquarium to be his best friend and keep him company.

Four great white pelicans, currently reside at the aquarium Ricky, Tyndall, Skylar and Matthew. They are the only aquarium residents that are not native to Florida. Ricky was trained by a film company to play the role of "Rufus" for the films Dolphin Tale and Dolphin Tale 2.

Twelve cownose rays and two southern stingrays currently reside in the Stingray Beach and Touch Tank exhibits, where they can be touched and fed by aquarium visitors.

CMA is known for having many animals in the past. Three dolphins have died at the aquarium. Sunset Sam died in 2001. Panama died of natural causes in 2013. In 2012, Indy, a young male, died leaving Nicholas to be the last male for now. CMA has rescued a large number of sea turtles such as Abe, Orchid, Alice, among many other names. They also had an otter named Cooper who died at the age of 17 in 2018. CMA once rescued a young sperm whale named George. Due to his apparent illnesses, George died 43 days after rescue. The aquarium also had a nurse shark named Louise, who was the companion of Thelma until she passed away in 2020.

Clearwater Marine Aquarium's expansion will allow the rescue and rehabilitation of more marine life, create an enhanced living habitat for the resident non-releasable animals, and provide more space for guests. The expansion will include tripling rescued dolphin habitat space consisting of 5 connecting pools, with approximately 1,500,000 US gallons (5,700,000 l) of water, nearly triple the previous amount. This enhanced, more natural habitat will be home to non-releasable dolphins Winter, Hope, PJ, and Nicholas. New hospital facilities and expanded education areas with total new guest space of 103,000 sq feet, and more hospital facilities for our rescued marine life. CMA is currently researching the ways in which it can utilize the adjacent waterway for our rescue and rehabilitation work. There is a new parking garage consisting of 400 parking spots. The new expansions were opened in October 2020.

All content from Kiddle encyclopedia articles (including the article images and facts) can be freely used under Attribution-ShareAlike license, unless stated otherwise. Cite this article:
Clearwater Marine Aquarium Facts for Kids. Kiddle Encyclopedia.