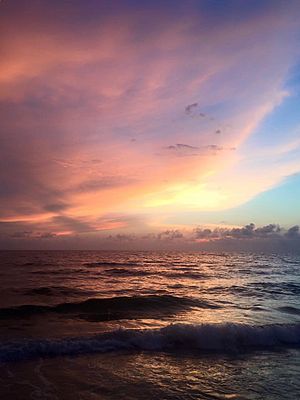 Clearwater Beach includes a resort area and a residential area on the Gulf of Mexico in Pinellas County on the west-central coast of Florida. Located just west over the Intracoastal Waterway by way of the Clearwater Memorial Causeway from the city of Clearwater, Florida, of which it is part, Clearwater Beach is at a geographic latitude of 27.57 N and longitude 82.48 W.

Clearwater Beach is characterized by white sand beaches stretching for 2.5 miles (4 km) along the Gulf and sits on a barrier island. It has a full marina on the Intracoastal Waterway side and is linked on the south by a short bridge to another barrier island called Sand Key, where Sand Key Park is located.

The area offers shopping, restaurants, and activities such as parasailing, jet ski rentals, boat tours (with a common sighting of dolphins in the Gulf waters), miniature golf, fishing charters, and "pirate ship" cruises.

Clearwater Beach is officially classified as having a humid subtropical climate, however, the area is actually has more similarities with a tropical climate, resulting in hot, humid summers with frequent thunderstorms, and mild, dry winters

The Clearwater Jolley Trolley has provided transportation up and down the beach since 1982. It currently runs to North Clearwater Beach and down to Sand Key, including Island Estates. Mandalay Avenue is the main drag on the north end of the beach with Gulfview Boulevard being so on the south. Both areas feature a variety of businesses. 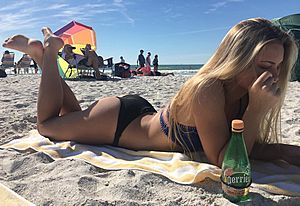 A girl tanning on Clearwater Beach. 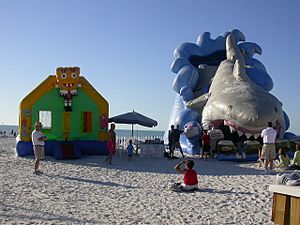 Pier 60, named for State Road 60 which terminates in Clearwater Beach, is a central spot for beachgoers and has a playground, a snack bar with attached souvenir shop, and a long fishing pier. There are professional entertainers who perform on the pier every day, along with children's acts. It's the site of a daily event called Sunsets at Pier 60, which includes street performers and musical acts. On the pier itself is a nightly display of goods sold by local artisans such as jewelry, candles, and other gift items.

Numerous restaurants and shops can be found adjacent to the beach, whose attractiveness was greatly improved in recent years with a beautification project called Beach Walk. The Beach Walk is located just south of Pier 60. There are drinking fountains, shower nozzles for beachcombers to rinse the sand off, and bicycle racks, as part of the upgrade. It also is a great spot for fishing. Beach "renourishment" efforts such as dune restoration enhance the area's natural beauty along a wide curving sidewalk. In addition, directly across from the pier is the Clearwater Municipal Marina, which offers deep sea fishing and boating activities for visitors. 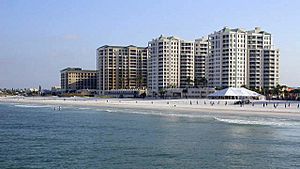 In July 2008 the long-anticipated Beach Walk project was completed, featuring a compact pedestrian zone with high-end hotels and condos.

A paved bicycle trail lined by mangrove trees is available nearby which parallels the Clearwater Memorial Causeway to the city.

Just up the causeway from the Beach, in the Island Estates area, is the Clearwater Marine Aquarium (home of Winter, the bottlenose dolphin featured in the movie Dolphin Tale), as well as a grocery store and other amenities.

All content from Kiddle encyclopedia articles (including the article images and facts) can be freely used under Attribution-ShareAlike license, unless stated otherwise. Cite this article:
Clearwater Beach Facts for Kids. Kiddle Encyclopedia.