The great white pelican (Pelecanus onocrotalus) is also known as the Eastern white pelican or white pelican. They are the second largest birds in the pelican family, with only the Dalmatian pelican larger than them.

The pelican breeds in southeastern Europe, south Asia, and Africa. They are most common in Africa, as 80% of the 90,000 breeding pairs mate there. However, because of climate change and humans using the wetlands they live in, some populations of great white pelicans are declining.

The Great White Pelican is a large bird with a mass of 10 kg (22 lbs), 160 cm (63 in) long and with a 280 cm (110 inch) wingspan. It differs from the Dalmatian Pelican, the only larger species of pelican, by its pure white, rather than greyish-white, plumage, a bare pink facial patch around the eye and pinkish legs. Males are larger than females, and have a long beak that grows in a downwards arc, as opposed to the shorter, straighter beak of the female. Immature birds are grey and have dark flight feathers. In flight, it is an elegant soaring bird, with the head held close to and aligned with the body by a downward bend in the neck. In breeding condition the male has pinkish skin on its face and the female has orangey skin.

The Great White Pelican is well adapted for aquatic life. The short strong legs and webbed feet propel it in water and aid the rather awkward takeoff from the water surface. Once aloft, the long-winged pelicans are powerful fliers, however, and often travel in spectacular V-formation groups. The pelican's pouch is simply a scoop. As the pelican pushes its bill underwater, the lower bill bows out, creating a large pouch which fills with water and fish. As the bird lifts its head, the pouch contracts, forcing out the water but retaining the fish. A group of 6 to 8 great white pelicans will gather in a horseshoe formation in the water to feed together. They dip their bills in unison, creating a circle of open pouches, ready to trap every fish in the area. Large numbers of these pelicans breed together in colonies. The female lays 2 to 4 eggs. Nest location varies with some populations making stick nests in trees and others, such as those in Africa, nesting exclusively in scrapes on the ground lined with grass, sticks, feathers and other material. The young are cared for by both parents. 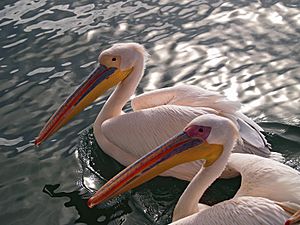 A pair in breeding condition in Walvis Bay, Namibia

Well scattered groups occur from the eastern Mediterranean through to Vietnam and south to South Africa. Sedentary populations are found year-round in Africa, south of the Sahara Desert although these are patchy, occurring mainly in coastal, estuarine areas and around very large inland water bodies. Migratory populations are found from Eastern Europe to Kazakstan during the breeding season and from northeast Africa through Iraq to north India in the winter. More than 50% of Great White Pelicans breed in the Danube Delta in Romania. 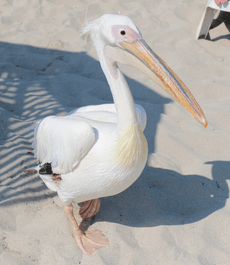 The diet of the Great White Pelican consists mainly of fish. Each pelican needs about 1.4 kg of fish every day. This corresponds to around 28 million kilograms of fish every year consumed at the largest colony of Great White Pelicans, on Tanzania's Lake Rukwa, with almost 75000 birds. Pelicans are not restricted to fish, however, and are often opportunistic foragers. In some situations they eat chicks of other birds, such as the well documented case off the southwest coast of South Africa. Here breeding Pelicans from the Dassen Island colony predate chicks up to 2 kg from the Cape Gannet colony on Malgas Island. Great White Pelicans also eat crustaceans, tadpoles and even turtles. They readily accept handouts from humans, and a number of unusual items have been recorded in their diet. During periods of starvation, pelicans also eat seagulls and ducklings. The gulls are held under water and drowned before being eaten headfirst. Pelicans will also rob other birds of their prey. 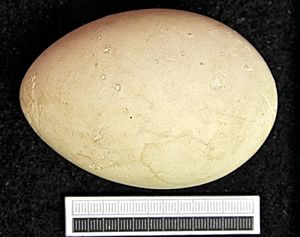 The breeding season commences in April or May in temperate zones, is essentially all year around in Africa and runs February through April in India. Large numbers of these pelicans breed together in colonies. The female can lay from 1 to 4 eggs in a clutch, with two being the average. Nest locations are variable. Some populations making stick nests in trees but a majority, including all those who breed in Africa, nest exclusively in scrapes on the ground lined with grass, sticks, feathers and other material. The young are cared for by both parents.

The incubation stage lasts for 29 to 36 days. The chicks are naked when they hatch but quickly sprout blackish-brown down. The colony gathers in "pods" around 20 to 25 days after the eggs hatch. The young fledge at 65 to 75 days of age. Around 64% of young successful reach adulthood, with sexual maturity attained at 3 to 4 years of age. White pelicans are often protected from bird-eating raptors by virtue of their own great size, but eagles, especially sympatric Haliaeetus species, may predate their eggs, nestlings and fledgings. Occasionally, pelicans and their young are attacked at their colonies by mammalian carnivores from jackals to lions. As is common in pelicans, the close approach of a large predaceous or unknown mammal, including a human, at a colony will lead the pelican to abandon their nest in self-preservation. Additionally, crocodiles, especially Nile crocodiles in Africa, will readily kill and eat swimming pelicans. 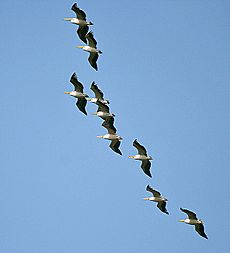 Today, because of overfishing in certain areas, White Pelicans are forced to fly long distances to find food. Great white pelicans are exploited for many reasons. Their pouch is used to make tobacco bags, Their skin is turned into leather, the guano is used as fertiliser, and the fat of young pelicans is converted into oils for traditional medicine in China and India. Human disturbance, loss of foraging habitat and breeding sites, and pollution are all contributing to the decline of the Great White Pelican.

This species is often kept in captivity, in zoos or in semi-wild colonies such as that in St. James's Park, London. The ancestors of this colony were originally given to Charles II by the Russian Ambassador in 1664 which initiated the tradition of ambassadors donating the birds.

All content from Kiddle encyclopedia articles (including the article images and facts) can be freely used under Attribution-ShareAlike license, unless stated otherwise. Cite this article:
Great white pelican Facts for Kids. Kiddle Encyclopedia.