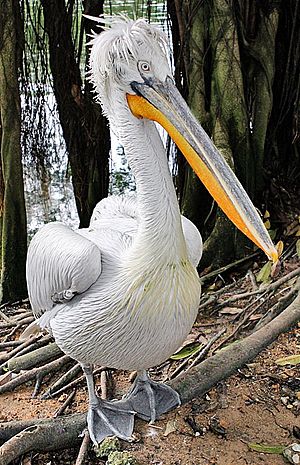 The Dalmatian pelican (Pelecanus crispus) is a large bird. It lives in wet places such as in swamps and shallow lakes. It can be found from southeastern Europe to Pakistan and China.

This huge bird is by a slight margin the largest of the pelican species and one of the largest living bird species. It measures 160 to 183 cm (5 ft 3 in to 6 ft 0 in) in length, 7.25–15 kg (16.0–33.1 lb) in weight and 245 to 351 cm (8 ft 0 in to 11 ft 6 in) in wingspan. Its median weight is around 11.5 kg (25 lb), which makes it perhaps the world's heaviest flying bird species, although the largest individuals among male bustards and swans may be heavier than the largest individual Dalmatian pelican. More recently, six male Dalmatians were found to average 10.4 kg (23 lb) and four females 8.7 kg (19 lb), around the same average weight as the great white pelican (Pelecanus onocrotalus) and slightly lighter than mean body masses from other huge birds such as the trumpeter swan (Cygnus buccinator) or Andean condor (Vultur gryphus). A mean estimated body mass for the Dalmatian pelican of 10.9 kg (24 lb) was also published, around the same mass as the aforementioned largest swan and condor. It is either the heaviest or one of the heaviest birds native to Europe, its closest rivals in mass being mute swans (Cygnus olor) and cinereous vultures (Aegypius monachus), which both weigh on average around 10 kg (22 lb), followed closely by great white pelicans and the whooper swans (Cygnus cygnus). It also appears to have one of the largest wingspans of any living bird, rivaling those of the great albatrosses (Diomedea ssp., in particular the two largest species, the wandering albatross and southern royal albatross) and the great white pelican. These four species are the only modern birds with verified wingspans that range over 350 cm (11 ft 6 in).

The somewhat similar-looking great white pelican broadly overlaps in size but has greater size sexual dimorphism: female great whites can be noticeably smaller than female Dalmatians but male individuals of the two species are essentially the same size and weight. However, the Dalmatian differs from this other very large species in that it has curly nape feathers, grey legs and silvery-white (rather than pure white) plumage. In winter, adult Dalmatian pelicans go from silvery-grey to a dingier brownish-grey cream colour. Immature birds are grey and lack the pink facial patch of immature white pelicans. The loose feathers around the forehead of the Dalmatian pelican can form a W-like-shape on the face right above the bill. In the breeding season it has an orange-red lower mandible and pouch against a yellow upper mandible. In winter, the whole bill is a somewhat dull yellow. The bill, at 36 to 45 cm (14 to 18 in) long, is the second largest of any bird, after the Australian pelican (Pelecanus conspicillatus). The bare skin around the eye can vary from yellow to purplish in colour. Among standard measurements, compared to the great white pelican, the Dalmatian's tarsus is slightly shorter, at 11.6 to 12.2 cm (4.6 to 4.8 in), but its tail and wing chord length are notably larger, at 22 to 24 cm (8.7 to 9.4 in) long and 68 to 80 cm (27 to 31 in), respectively. When the Dalmatian pelican is in flight, unlike other pelicans, its wings are solid grayish-white with black tips. It is an elegant soaring bird. When a whole flock of Dalmatian pelicans is in flight, all its members move in graceful synchrony, their necks held back like a heron's.

The Dalmatian pelican is often silent, as most pelicans tend to be, although it can be fairly vocal during the mating season, when it may engage in a wide range of guttural, deep vocalisations, including barks, hisses and grunts.

The Dalmatian pelican is found in lakes, rivers, deltas and estuaries. Compared to the great white pelican, the Dalmatian is not as tied to lowland areas and will nest in suitable wetlands with many elevations. It is less opportunistic in breeding habitat selection than the great white, usually returning to a traditional breeding site year after year unless it becomes completely unsuitable. During the winter, Dalmatian pelicans usually stay on ice-free lakes in Europe or jheels (seasonal lakes) in India. They also visit, typically during winter, inshore areas along sheltered coasts for feeding. 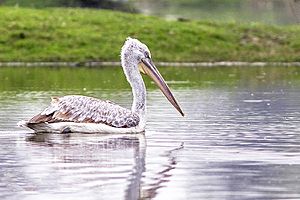 A Dalmatian Pelican from the lake of Bharatpur, Rajasthan, India

This pelican usually migrates short distances. It is dispersive in Europe, based on feeding opportunities, with most western birds staying through the winter in the Mediterranean region. In the Danube Delta, Dalmatian pelicans arrive in March and leave by the end of August. It is more actively migratory in Asia, where most of the birds that breed in Russia fly down for the winter to the central Middle East, largely around Iran through to the Indian Subcontinent, from Sri Lanka, Nepal to central India. The pelicans that breed in Mongolia winter along the east coast of China, including the Hong Kong area.

This pelican feeds almost entirely on fish. Preferred prey species can include common carp (Cyprinus carpio), European perch (Perca fluviatilis), common rudd (Scardinius erythropthalmus), eels, catfish (especially silurids during winter), mullet and northern pike (Esox lucius), the latter having measured up to 50 cm (20 in) when taken. In the largest remnant colony, located in Greece, the preferred prey is reportedly the native Alburnus belvica. The Dalmatian pelican requires around 1,200 g (2.6 lb) of fish per day and can take locally abundant smaller fish such as gobies, but usually ignore them in lieu of slightly larger fish. It usually forages alone or in groups of only two or three. It normally swims along, placidly and slowly, until it quickly dunks its head underwater and scoops the fish out, along with great masses of water. The water is dumped out of the sides of the pouch and the fish is swallowed. Occasionally it may feed cooperatively with other pelicans by corralling fish into shallow waters and may even cooperate similarly while fishing alongside cormorants in Greece. Occasionally, the pelican may not immediately eat the fish contained in its gular pouch, so it can save the prey for later consumption. Other small wetlands-dwellers may supplement the diet, including crustaceans, worms, beetles and small water birds, usually nestlings and eggs. 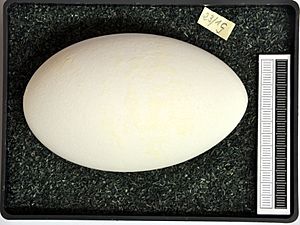 Among a highly social family in general, Dalmatian pelicans may have the least social inclinations. This species naturally nests in relatively small groups compared to most other pelican species and sometimes may even nest alone. However, small colonies are usually formed, which regularly include upwards of 250 pairs (especially historically). Occasionally, Dalmatian pelicans may mix in with colonies of great white pelicans. Nesting sites selected are usually either islands in large bodies of water (typically lagoons or river deltas) or dense mats of aquatic vegetation, such as extensive reedbeds of Phragmites and Typha. Due to their large size, these pelicans often trample the vegetation in the area surrounding their nests into the muddy substrate and thus nesting sites may become unsuitably muddy after around three years of usage.

The nest is a moderately-sized pile of grass, reeds, sticks and feathers, usually measuring about 1 m (3.3 ft) deep and 63 cm (25 in) across. Nests are usually located on or near the ground, often being placed on dense floating vegetation. Nests tend to be flimsy until cemented together by droppings. Breeding commences in March or April, about a month before the great white pelican breeds. The Dalmatian pelican lays a clutch of one to six eggs, with two eggs being the norm. Eggs weigh between 120 and 195 g (4.2 and 6.9 oz). Incubation, which is split between both parents, lasts for 30 to 34 days. The chicks are born naked but soon sprout white down feathers. When the young are 6 to 7 weeks of age, the pelicans frequently gather in "pods". The offspring fledge at around 85 days and become independent at 100 to 105 days old. Nesting success relies on local environmental conditions, with any where from 58% to 100% of hatchlings successfully surviving to adulthood. The nesting sites often insure limited nest predation, though carnivorous mammals which eat eggs and nestlings can access nests when water levels are low enough for them to cross, as has been recorded with wild boars (Sus scrofa) destroying nests in Bulgaria. Jackals, foxes, wolves, dogs (Canis ssp.) and lynxes (Lynx ssp.) are also regular nest predators when water levels are low and white-tailed eagles (Haliaeetus albicilla) may attack pelicans at the colony to at least the size of fledglings. Sexual maturity is thought to be obtained at three or four years of age.

All content from Kiddle encyclopedia articles (including the article images and facts) can be freely used under Attribution-ShareAlike license, unless stated otherwise. Cite this article:
Dalmatian pelican Facts for Kids. Kiddle Encyclopedia.