Keoladeo National Park or Keoladeo Ghana National Park formerly known as the Bharatpur Bird Sanctuary in Bharatpur, Rajasthan, India is a famous avifauna sanctuary that hosts thousands of birds, especially during the winter season. Over 230 species of birds are known to be resident. It is also a major tourist centre with scores of ornithologists arriving here in the hibernal season. It was declared a protected sanctuary in 1971. It is also a World Heritage Site.

Keoladeo Ghana National Park is a man-made and man-managed wetland and one of the national parks of India. The reserve protects Bharatpur from frequent floods, provides grazing grounds for village cattle, and earlier was primarily used as a waterfowl hunting ground.

The 29 km2 (11 sq mi) reserve is locally known as Ghana, and is a mosaic of dry grasslands, woodlands, woodland swamps and wetlands. These diverse habitats are home to 366 bird species, 379 floral species, 50 species of fish, 13 species of snakes, 5 species of lizards, 7 amphibian species, 7 turtle species and a variety of other invertebrates.

Every year thousands of migratory waterfowl visit the park for wintering and breeding. The sanctuary is one of the richest bird areas in the world and is known for nesting of resident birds and visiting migratory birds including water birds. The rare Siberian cranes used to winter in this park but this central population is now extinct. According to founder of the World Wildlife Fund Peter Scott, Keoladeo National Park is one of the world’s best bird areas. 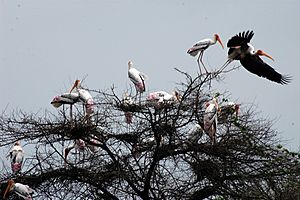 The sanctuary was created 250 years ago and is named after a Keoladeo (Shiva) temple within its boundaries. Initially, it was a natural depression; and was flooded after the Ajan Bund was constructed by Maharaja Suraj Mal, then the ruler of the princely state of Bharatpur, between 1726–1763. The bund was created at the confluence of two rivers, the Gambhir and Banganga. The park was a hunting ground for the Maharajas of Bharatpur, a tradition dating back to 1850, and duck shoots were organised yearly in honour of the British viceroys. In one shoot alone in 1938, over 4,273 birds such as mallards and teals were killed by Lord Linlithgow, then Viceroy of India.

A view of Keoladeo National Park wetland from a boat

The park was established as a national park on 10 March 1982. Previously the private duck shooting preserve of the Maharaja of Bharatpur since the 1850s, the area was designated as a bird sanctuary on 13 March 1976 and a Ramsar site under the Wetland Convention in October 1981. The last big shoot was held in 1964 but the Maharajah retained shooting rights until 1972. In 1985, the Park was declared a World Heritage Site under the world Heritage Convention. It is a reserve forest under the Rajasthan Forest Act, 1953 and therefore, is the property of the State of Rajasthan of the Indian Union. In 1982, grazing was banned in the park, leading to violent clashes between local farmers and the government. 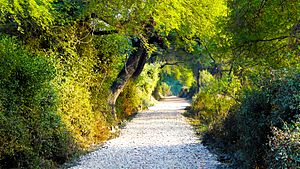 A view of Keoladeo National Park

Keoladeo (Bharatpur) National Park is in eastern Rajasthan. It is 2 kilometers (km) south-east of Bharatpur and 50 km west of Agra. The Park is spread over approx 29 square kilometer area. One third of the Keoladeo National Park habitat is wetland.

The uplands have grasslands (savannas) of tall species of grass together with scattered trees and shrubs present in varying density. Dykes divide the wetland into ten units. Each unit has a system of gates to control its water level. 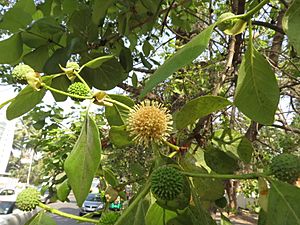 Forests, mostly in the north-east of the park, are dominated by kalam or kadam

Semi-arid, the park is the only area with significant vegetation, hence the term 'Ghana' meaning 'thicket'. The principal vegetation types are tropical dry forest, intermixed with dry grassland in areas where forest has been degraded. Apart from the artificially managed marshes; much of the area is covered by medium-sized trees and shrubs.

The common monitor lizard, Indian porcupine and bi-colored leaf-nose bat have been seen. The poisonous snakes found in the park are krait, cobra and Russell’s viper. 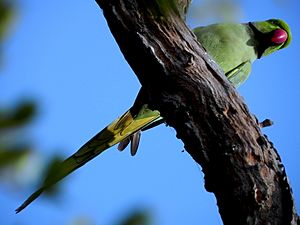 Macro invertebrates such as worms, insects and mollusks are present mostly in aquatic habitats. They are food for many fish and birds, as well as some animal species and constitute a major link in the food chain and functioning of the ecosystem. Land insects are in abundance and have a positive effect on the breeding of land birds.

Fish fauna of the park comprises 43 species. The fish population and diversity are of high ecological importance as they form the food source of many birds. Mammalian fauna of Keoladeo National Park is rich with 27 identified species. 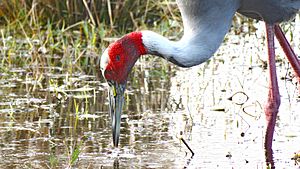 Keoladeo National Park is known as a “bird paradise”, since more than 370 bird species have been recorded in the park. The park has significance in two respects: one because of its location as a staging ground for migratory waterfowl arriving in the Indian subcontinent before moving to various regions. Further, waterfowl converge here before departing to breeding grounds in the western region. In addition, the wetland is a wintering area for massive congregations of waterfowl. It is also the only regular wintering area in India for the critically endangered Siberian crane. 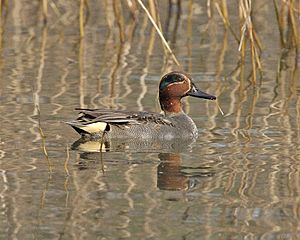 By virtue of being one of the best bird watching sites of Asia, more than 100,000 visitors come to the park every year. The range of visitors varies from very serious birdwatchers to school children. Of the visitors, 45,000 are foreign tourists. The park opens from sunrise to sunset around the year.

Food and accommodation facilities are available within the precincts of the park. Besides the normal tourism activities and self arranged bird watching tours of the Keoladeo National Park, visitors can also opt for a tour of this birding destination by selecting from an array of luxury tourist train services. Luxury trains like Palace on Wheels include Bharatpur Bird Sanctuary in its tour itinerary.

All content from Kiddle encyclopedia articles (including the article images and facts) can be freely used under Attribution-ShareAlike license, unless stated otherwise. Cite this article:
Keoladeo National Park Facts for Kids. Kiddle Encyclopedia.