Rostov on Don facts for kids 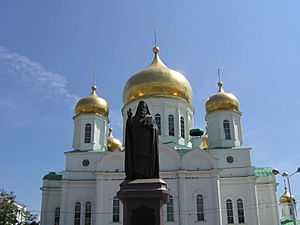 Monument to Dmitry Rostovsky and Cathedral of Rostov on Don in the background.

Rostov-on-Don (Russuan:Росто́в-на-Дону́, Rostov-na-Donu) is a city in the European part of Russia. It is on the River Don, about 46 km before it flows into the Sea of Azov. The city is the administrative center of Rostov Oblast and the Southern Federal District of Russia. About 1 million people live in the city (as of 2002).

The mouth of the Don River has been very important since the ancient times. It has been important for cultural reasons and for trade. The Greek colony Tanais was there, and also the Genoese fort Tana. Later, the Ottoman Empire built a fortress there. This fortress was named Azov.

Rostov-on-Don was founded in 1749. In that year, a customs house was built on the Don. Later, a large fortress followed. It was named after Saint Dimitry of Rostov. Dmitry of Rostov was a bishop from the old Northern town Rostov the Great. With the time, the importance of the fortress Asov became less and less. The settlement near the fortress became more important than the fortress. It was the commercial centre of the region. In 1796 this settlement received city rights and was renamed Rostov-on-Don. 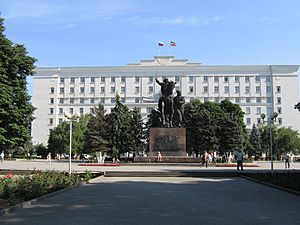 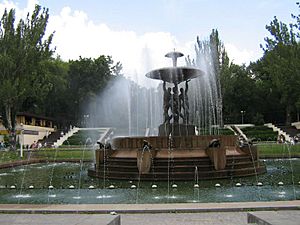 Fountain in park of Revolution

The Don River that the city is named afrer is a major shipping lane. It connects southwestern Russia with regions to the north. Rostov-on-Don is an important river port both for people and industrial shipping. With such a good geographical location, the city grew quickly. It is the most industrialized city of South Russia. Because of this, the city caused a large problem between the Whites and the Bolsheviks during the Civil War. By 1928, the regional government was moved from the old Cossack capital Novocherkassk to Rostov. The nearby Armenian town of Nor Nakhijevan became a part of the city.

In the Soviet years, the Bolsheviks destroyed two of Rostov's main landmarks - St Alexander Nevsky Cathedral (1908) and St George Cathedral in Nakhichevan (1783-1807). Much of the city was destroyed by the German forces who took control of it three times - in 1918, 1941 and 1942. Today, the most notable part of the historical city is the very big Cathedral of Virgin's Nativity (1860-87), designed by Konstantin Thon.

Rostov-on-Don has had much economic growth in recent years. Part of this is because the Russian economy is getting stronger. Many new companies have built headquarters in the city. People living in the city are making more money than they did in the past. The city is being changed from a place thrown back in time by the collapse of communism into a modern, industrial and technology-rich city.

Public educational institutions include Southern Federal University and Don State Technical University. The major private university in the city is the Institute of Management, Business and Law. There is also a French cultural center, run by Alliance Francaise, a British-Council, a Goethe-Institut, and a Bosch Foundation.

Rostov Economic State University 'RINH' is a very famous university in Rostov-on-Don. It has 5 Institutes, as Finance, IT and Management, National and World Economics, Marketing and Commerce, Account and Economics, Law, Linguistics and Journalism and 9 filials.

Two professional football clubs are based in Rostov-on-Don. FC Rostov play in the Russian Premier League and SKA are in the First Division. Handball team Rostov-Don plays in the Russian Handball Championship. 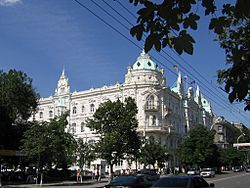 The city is twinned with:

All content from Kiddle encyclopedia articles (including the article images and facts) can be freely used under Attribution-ShareAlike license, unless stated otherwise. Cite this article:
Rostov on Don Facts for Kids. Kiddle Encyclopedia.