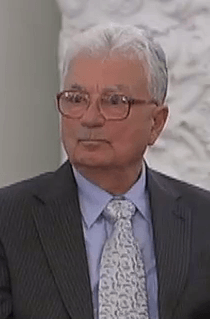 Yuri Oganessian (Russian: Юрий Цолакович Оганесян [ˈjʉrʲɪj t͡sɐˈlakəvʲɪt͡ɕ ɐgənʲɪˈsʲan]; born 14 April 1933) is a Russian nuclear physicist. He is considered a leader on the subject of superheavy elements. The chemical element oganesson (atomic number 118) is named after him. He is one of only two people who was still alive when a chemical element was named after him. The other was Glenn Seaborg, after whom seaborgium is named.

All content from Kiddle encyclopedia articles (including the article images and facts) can be freely used under Attribution-ShareAlike license, unless stated otherwise. Cite this article:
Yuri Oganessian Facts for Kids. Kiddle Encyclopedia.