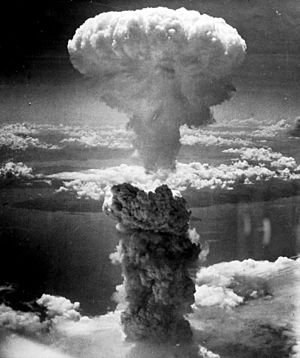 The atomic bomb dropped on Nagasaki had a plutonium charge.

A period 7 element is an element in the seventh period (row) of the periodic table. It contains 32 elements, beginning at Francium and ending with Ununoctium. The Actinides are part of this period.

All elements of period 7 are radioactive. This period contains the actinides, which contains the heaviest naturally occurring element, plutonium; subsequent elements must be synthesized artificially. Whilst the first five of these are now available in macroscopic quantities, most are extremely rare, having only been prepared in microgram amounts or less. The later, transactinide elements have only been identified in laboratories in batches of a few atoms at a time.

Although the rarity of many of these elements means that experimental results are not very extensive, their periodic and group trends are less well defined than other periods. Whilst francium and radium do show typical properties of their respective groups, actinides display a much greater variety of behaviour and oxidation states than the lanthanides. These peculiarities are due to a variety of factors, including a large degree of spin-orbit coupling and relativistic effects, ultimately caused by the very high positive electrical charge from their massive atomic nuclei.

All content from Kiddle encyclopedia articles (including the article images and facts) can be freely used under Attribution-ShareAlike license, unless stated otherwise. Cite this article:
Period 7 element Facts for Kids. Kiddle Encyclopedia.