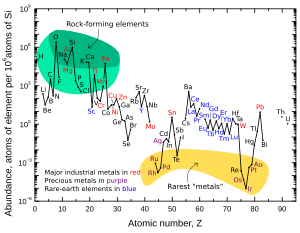 Primordial nuclides are nuclides found on Earth which have existed since before the Earth was formed. They are also called primordial isotopes.

There are 252 stable nuclides, plus another 34 nuclides that have half-lives long enough to have survived from the formation of the Earth. These are the primordial nuclides. The 34 primordial radionuclides are isotopes of 28 separate elements.

All content from Kiddle encyclopedia articles (including the article images and facts) can be freely used under Attribution-ShareAlike license, unless stated otherwise. Cite this article:
Primordial nuclide Facts for Kids. Kiddle Encyclopedia.