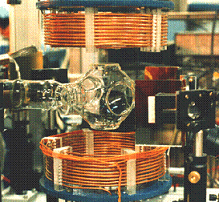 Neutral francium atoms can be trapped in the MOT using a magnetic field and laser beams.

Francium is a chemical element with the chemical symbol Fr and an atomic number of 87. It is a metal. In chemistry it is placed in a group of metal elements named the alkali metals. Francium is very radioactive. It is in very small amounts in uranium and thorium ores. It has the lowest electronegativity and electron affinity of all the chemical elements.

Francium reacts violently with water, as do all of the elements in group 1 on the periodic table.

Francium is one of the hardest to find elements on the planet Earth. It is estimated that there are only about 15 grams or half an ounce in the Earth's crust at a single time.

Although chemists knew the element number 87 in the periodic table should exist, it was a long time before it was discovered. In the early 1900s, nearly all boxes on the periodic table had been filled. Chemists knew that one element had been found to fit into each box. Francium was discovered in 1939 by a French chemist called Marguerite Perey. She named it after her home country, France.

All content from Kiddle encyclopedia articles (including the article images and facts) can be freely used under Attribution-ShareAlike license, unless stated otherwise. Cite this article:
Francium Facts for Kids. Kiddle Encyclopedia.