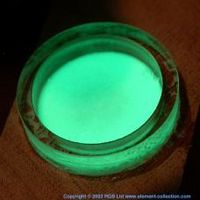 Promethium is a chemical element that has the symbol Pm on the periodic table. It has the atomic number 61 which means it has 61 protons in its atom. It is a Lanthanide. All its isotopes are radioactive. Together with Technetium, these are the only two radioactive elements below lead. Most Promethium is artificially produced, and has between 141 and 156 protons. The longest-living promethium is 145Pm, with a half-life of 17.7 years.

Promethium is used in the illuminated digits of some clocks, its Beta Radiation may be used to measure thickness.

All content from Kiddle encyclopedia articles (including the article images and facts) can be freely used under Attribution-ShareAlike license, unless stated otherwise. Cite this article:
Promethium Facts for Kids. Kiddle Encyclopedia.