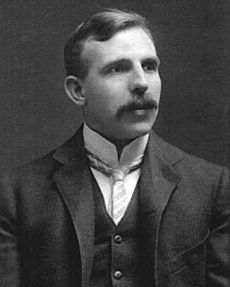 The tetrahedral structure of the RfCl4 molecule

Rutherfordium is a chemical element. It has also been named eka-hafnium and unnilquadium. It has the symbol Rf. It has the atomic number 104. It is a very radioactive element that does not exist in nature. It has to be made. Rutherfordium is the first transactinide element. The isotope that has the longest half-life is 265Rf. Rutherfordium-265 only has a half life of about 13 hours.

Rutherfordium was named after Ernest Rutherford. It was reported that it was first made in 1964 at the Joint Institute for Nuclear Research at Dubna, Russia. The scientists reported that they bombarded a different chemical element 242Pu with the element 22Ne. The neon-22 particles were accelerated to an energy of 113 to 115 MeV. They claim they detected nuclear fission tracks in a special type of glass with a microscope showing that a new element was there.

The scientists at the Joint Institute for Nuclear Research claimed that it was first detected in Dubna. They thought it should be named dubnium (Db) or kurchatovium (Ku) for Igor Vasilevich Kurchatov (1903-1960).

The scientists at the University of California, Berkeley thought it should be named rutherfordium (Rf).

The International Union of Pure and Applied Chemistry (IUPAC) decide the name of elements that should be used by everyone. They used unnilquadium (Unq) as a temporary name. Unnilquadium is the systematic element name. In 1997 they resolved the dispute and used the current name of rutherfordium. The chemical element with atomic number 105 was named dubnium.

All content from Kiddle encyclopedia articles (including the article images and facts) can be freely used under Attribution-ShareAlike license, unless stated otherwise. Cite this article:
Rutherfordium Facts for Kids. Kiddle Encyclopedia.