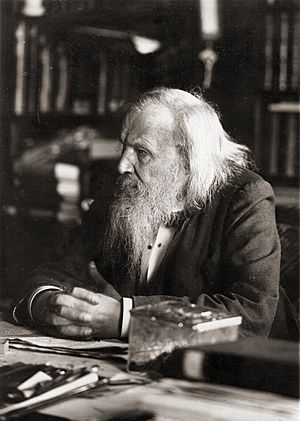 The element was named after Dmitri Mendeleev.

Mendelevium (pronounced /ˌmɛndəˈlɛviəm/)) is a synthetic element with the symbol Md (used to be Mv) and the atomic number 101. It is a metallic radioactive transuranic element of the actinides. Mendelevium is created by einsteinium and alpha particles forcefully combining and was named after Dmitri Mendeleev, the creator of the Periodic Table.

All content from Kiddle encyclopedia articles (including the article images and facts) can be freely used under Attribution-ShareAlike license, unless stated otherwise. Cite this article:
Mendelevium Facts for Kids. Kiddle Encyclopedia.