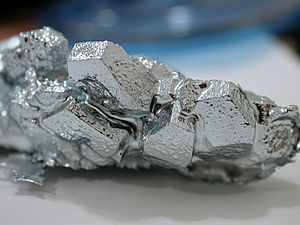 Crystals of gallium joined together

Gallium is a metal, but is has some unusual properties. If it is held in a person's hand, it will melt. Gallium does not conduct electricity well, and is known as a semiconductor. That means gallium can be used in computers to make them work. It is very shiny, so it is used to paint mirrors when melted.

Very pure gallium has a stunning silvery color and its solid metal breaks easily like glass. Gallium metal expands by 3.1 percent when it solidifies, and therefore should not be stored in either glass or metal containers. Gallium also corrodes most other metals by diffusing into their metal lattice.

Gallium (Latin Gallia meaning Gaul; also gallus, meaning "rooster") was discovered spectroscopically by Lecoq de Boisbaudran in 1875. Before its discovery, most of its properties had been predicted and described by Dmitri Mendeleev (who called the hypothetical element eka-aluminium) on the basis of its position in his periodic table. Later, in 1875, Boisbaudran obtained the free metal through the electrolysis of its hydroxide in KOH solution. He named the element after his native land of France and, in one of those multilingual puns so beloved of men of science of the early 19th century, after himself, as 'Lecoq' = the rooster, and Latin for rooster is "gallus". 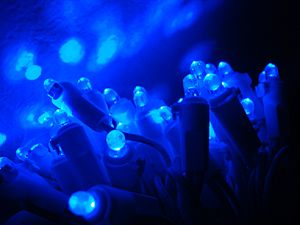 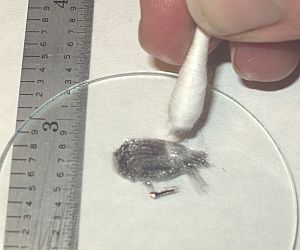 Galinstan from a broken thermometer, easily wetting a piece of glass.

Analog integrated circuits are the most common application for gallium, with optoelectronic devices (mostly laser diodes and light-emitting diodes) as the second largest end use.
Other uses include:

Gallium does not exist in pure form in nature, nor are gallium compounds a primary source of extraction. It is rather found and extracted from minerals and ores in the Earth's crust. Some flue dusts from burning coal have been shown to contain as much 1.5 percent gallium.

While not considered toxic, the data about gallium is inconclusive. Some sources suggest that it may cause dermatitis from prolonged exposure; other tests have not caused a positive reaction.

All content from Kiddle encyclopedia articles (including the article images and facts) can be freely used under Attribution-ShareAlike license, unless stated otherwise. Cite this article:
Gallium Facts for Kids. Kiddle Encyclopedia.