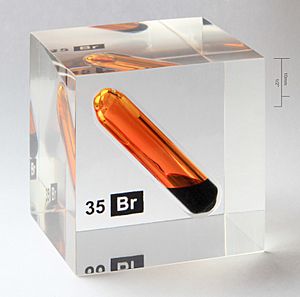 Bromine (Br) is a chemical element. Its atomic number (which is the number of protons in it) is 35, and its atomic weight is 80. It is part of the Group 7 elements (halogens) on the periodic table. It is diatomic, which means that two atoms are stuck together to make a molecule in any bromine sample.

Bromine is a red-brown liquid. Liquid elements are rare; only bromine and mercury are liquid at room temperature. It easily evaporates to make suffocating brown fumes. It has a bad smell. Its name means "stench of he-goats". It can become a metal at very high pressures.

It has two stable isotopes. They are 79Br and 81Br. There are about 29 other radioactive isotopes.

Bromine is quite reactive. Its reactivity is between chlorine, which is more reactive, and iodine, which is less reactive. It reacts with metals and nonmetals. Phosphorus reacts violently with bromine. Aluminum reacts in a similar way. It can bleach things like chlorine. It reacts better in the light. It dissolves a little in water. Hot water makes it disproportionate into hydrobromic acid and hypobromous acid. Bromine can form compounds with substances such as sodium to form sodium bromide.

Bromine forms compounds in many oxidation states: –1, +1, +3, +5, and (sometimes) +7. –1 is the most common. It is found as bromide. Bromides are not reactive. They are colorless solids that dissolve in water easily. Covalent bromides can be liquids or gases. The other compounds are all strong oxidizing agents. Their chlorine cousins are more common. +1 has the hypobromites, which are unstable. +3 has the bromites. Bromine dioxide is the only common bromine compound found in the +4 oxidation state. +5 has the bromates, which are more common than all the other ones except the bromides. Bromates are strong oxidizing agents and are sometimes added to flour. +7 has the perbromates. Perbromates are very unstable.

Bromine is found as bromide in the ocean and in brine pools. The Dead Sea has a lot of bromide in it. Bromine is not an important part of our body, unlike its relatives chlorine and iodine.

Bromine is made by bubbling chlorine gas through a solution of a bromide. The bromide is oxidized to bromine, while the chlorine is reduced to chloride.

It is mainly used to make organobromine compounds, organic compounds with bromine in them. Organobromines are used to put out fires. They used to be added to gasoline. Some were used as pesticides. Some inorganic bromides were used as sedatives. Bromine can also be used as a disinfectant. Silver bromide is used in film.

Bromine is toxic and corrosive to skin. Bromine gas is irritating when it is breathed in, too. Bromine can react violently with many things.

All content from Kiddle encyclopedia articles (including the article images and facts) can be freely used under Attribution-ShareAlike license, unless stated otherwise. Cite this article:
Bromine Facts for Kids. Kiddle Encyclopedia.