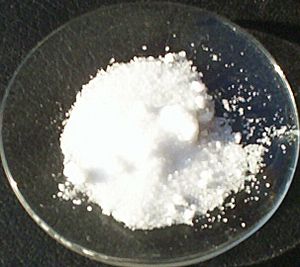 Sodium bromide is a chemical compound. Its chemical formula is NaBr. It is made of sodium and bromide ions.

Sodium bromide is a white solid. It dissolves easily in water. When it is heated very strongly in air, it makes bromine gas. It also reacts with chlorine to make liquid bromine.

It is made by reacting hydrogen bromide with sodium hydroxide. It can be made by mixing sodium and bromine, although this reaction is very violent.

Sodium bromide is only toxic in large amounts, like sodium chloride.

All content from Kiddle encyclopedia articles (including the article images and facts) can be freely used under Attribution-ShareAlike license, unless stated otherwise. Cite this article:
Sodium bromide Facts for Kids. Kiddle Encyclopedia.