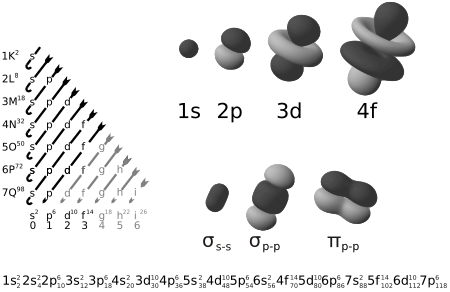 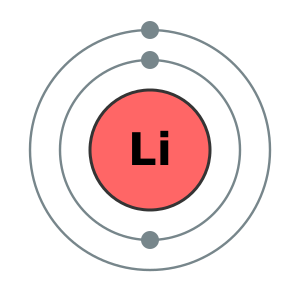 A Bohr diagram of lithium

In atomic physics and quantum chemistry, the electron configuration is the distribution of electrons of an atom or molecule (or other physical structure) in atomic or molecular orbitals.

Electronic configurations describe each electron as moving independently in an orbital, in an average field created by all other orbitals. Mathematically, configurations are described by Slater determinants or configuration state functions.

According to the laws of quantum mechanics, for systems with only one electron, a level of energy is associated with each electron configuration and in certain conditions, electrons are able to move from one configuration to another by the emission or absorption of a quantum of energy, in the form of a photon.

Knowledge of the electron configuration of different atoms is useful in understanding the structure of the periodic table of elements. This is also useful for describing the chemical bonds that hold atoms together. In bulk materials, this same idea helps explain the peculiar properties of lasers and semiconductors.

All content from Kiddle encyclopedia articles (including the article images and facts) can be freely used under Attribution-ShareAlike license, unless stated otherwise. Cite this article:
Electron configuration Facts for Kids. Kiddle Encyclopedia.