St. George Island is an island and Census-designated place (CDP) off the Florida Panhandle in the northern Gulf of Mexico. It is in Franklin County, Florida, United States.

St. George Island is informally divided into three regions: the Dr. Julian G. Bruce St. George Island State Park; a public strip of restaurants, bars, small businesses, homes and public beach; and a private, gated housing community with its own airstrip that includes some of the most expensive multimillion-dollar beach homes along the Gulf of Mexico.

The island is known for being quiet and tranquil due to its small size. Many occupants of the island rent out their homes during the spring and summer months. As of 2008[update], the island has no central sewage system and receives very little funding for road and infrastructure improvements, leading some to believe the island should form its own special taxing district.

St. George Island State Park occupies the eastern nine miles (14 km) of the island. People can camp there as well as swim with reservations. Many fishing reservations are also available in the area. The park has a series of hiking trails, boardwalks and observation platforms. Bird watching is a popular activity there. The area is well known for its excellent variety of Apalachicola Bay and Gulf of Mexico fish and seafood including oysters, scallops, grouper, flounder, redfish, snapper, trout, mullet, and others. 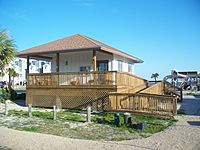 St. George Island was first inhabited by the Muscogee people between the 10th and 15th centuries, who were all killed off by disease. With the arrival of European colonists to the area in the late 18th century came an intense struggle for control. In 1803, the Creek Indians ceded a large tract of land, which included St. George Island, to trader John Forbes and Company, known as the Forbes Grant.

In 1823 John Lee Williams sought refuge there. With a shortage of food supplies, his crew depended on the island’s ample store of oysters and crabs. Soon afterwards, the island experienced a surge in trading activities especially along the banks of the Apalachicola River. This led to the construction of the Cape St. George Lighthouse on the island in 1833. The lighthouse was torn down and rebuilt two miles away in 1847–48, and rebuilt after being destroyed by a hurricane in 1851. It was taken out of service during the American Civil War, but afterwards served as a navigational tool for incoming ships until it was decommissioned in 1994. Hurricanes in 1995 and 1998 undermined the tower. A new foundation was built under the tower, but it collapsed in 2005. The lighthouse has since been reconstructed.

During the early and mid-20th century the island's pine forest was used for turpentine production in naval stores.

During World War II, St. George Island was a practice range for B-24 bombers from nearby Apalachicola.

In 1954, the U.S. Army Corps of Engineers constructed the ship channel known as Bob Sikes Cut across St. George Island creating Cape St. George Island or "Little St. George Island" and enhanced its remoteness. The cut is used by the fishing fleet from Apalachicola and provides an access to the Gulf waters from the bayside.

The island is composed of mostly sand dunes with sea oats and pine trees. The west end of the island is known as the St George Plantation. It's over 1,200 acres (4.9 km2) with 24/7 security and accessible only to owners and their rental designees. It is quite a bit wider than the eastern portion of the island.

Scrub and sea oats can be found on the newer dunes, slash pine flatwoods in the older relic dunes. The western part of the island is more forested while the eastern two-thirds is more sparse in trees. 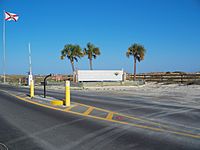 St. George Island is a known nesting ground for loggerhead sea turtles. They come to the beach to lay their eggs between the months of May and October.

All content from Kiddle encyclopedia articles (including the article images and facts) can be freely used under Attribution-ShareAlike license, unless stated otherwise. Cite this article:
St. George Island (Florida) Facts for Kids. Kiddle Encyclopedia.