Kids Encyclopedia Facts
This page is about a city in Florida. For other uses of the term, see Apalachicola (disambiguation).

Apalachicola ( AP-ə-LACH-i-KOH-lə) is a city and the county seat of Franklin County, Florida, United States, on the shore of Apalachicola Bay, an inlet of the Gulf of Mexico. The population was 2,231 at the 2010 census.

"Apalachicola" comes from the Apalachicola tribe and is a combination of the Hitchiti words apalahchi, meaning "on the other side", and okli, meaning "people". In original reference to the settlement and the subgroup within the Seminole tribe, it probably meant "people on the other side of the river". Many inhabitants of Apalachicola have said their name means "land of the friendly people". 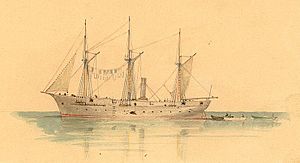 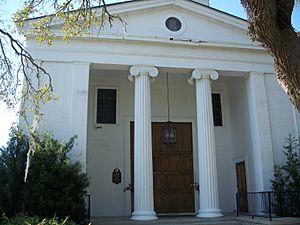 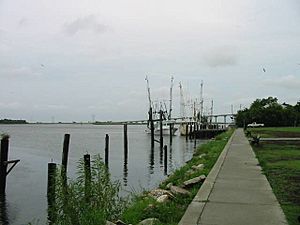 The mouth of the Apalachicola River, looking towards the bay 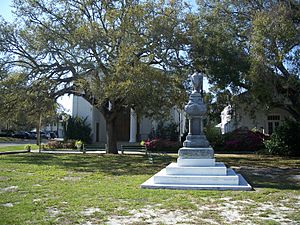 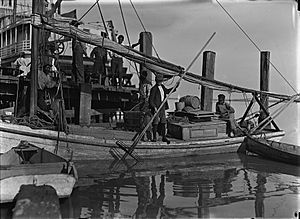 A British trading post called "Cottonton" was founded at this site on the mouth of the Apalachicola River. Gradually after acquisition by the United States and related development in Alabama and Georgia, it attracted more permanent European-American residents. In 1827, the town was incorporated as "West Point". Apalachicola received its current name in 1831, by an act of the Legislative Council of the Territory of Florida.

Trinity Episcopal Church was incorporated by an act of the Legislative Council of the Territory of Florida on February 11, 1837. The building was one of the earliest prefabricated buildings in the United States. The framework was shipped by schooner from New York City and assembled in Apalachicola with wooden pegs.

Botanist Alvan Wentworth Chapman (1809–1899) settled in Apalachicola in 1847. In 1860, he published his major work, Flora of the Southern United States. The former (now closed) elementary school is named in his honor.

In 1849, Apalachicola physician Dr. John Gorrie (1802–1855) discovered the cold-air process of refrigeration and patented an ice machine in 1850. He had experimented to find ways to lower the high temperatures of fever patients. His patent laid the groundwork for development of modern refrigeration and air conditioning, making Florida and the South more livable year round. The city has a monument to him, and a replica of his ice machine is on display in the John Gorrie Museum. The John Gorrie Memorial Bridge, originally built in 1935 and rebuilt in 1988, carries U.S. 98 across Apalachicola Bay to Eastpoint.

Before the development of railways in the Gulf states, Apalachicola was the third busiest port on the Gulf of Mexico (behind New Orleans and Mobile). The AN Railway, formerly the Apalachicola Northern Railroad, serves the city. In the late 19th century and early 20th century, the sponge trade, led by Greek immigrants, was a major industry in town.

Apalachicola is still the home port for a variety of seafood workers, including oyster harvesters and shrimpers. More than 90% of Florida's oyster production is harvested from Apalachicola Bay. Every year the town hosts the Florida Seafood Festival. The bay is well protected by St. Vincent Island, Flag Island, Sand Island, St. George Island, and Cape St. George Island.

On April 3, 1862, during the American Civil War, the gunboat USS Sagamore and 186-foot (57 m) steamer USS Mercedita (relieving the USS Marion) captured Apalachicola. Union forces occupied west Florida during much of the war.

In 1979, Exxon relocated their experimental subsea production system from offshore Louisiana to a permitted artificial reef site off Apalachicola. This was the first effort to turn an oil platform into an artificial reef.

Apalachicola is home to the Dixie Theatre, a professional Equity theater which is both a producing and presenting live performance venue. It is considered the artistic center of Franklin County. Originally built in 1912, the theatre was fully renovated beginning in 1996. It reopened in 1998.

Travel to Apalachicola continues to increase as tourists seek experiences of "Old Florida", as many describe the feel of smaller coastal communities in the state. Southern Living published a feature article "Florida's Quiet Side" in February 2007. Wanda McKinney writes:

Morning comes gently to Apalachicola. Oyster boats and shrimpboats begin their daily pilgrimages into the seafood-rich bay as the sun rises on the Northwest Florida coast. The lights twinkle on in this fishing village, its residents ready for another day in unspoiled paradise. If you ever wondered if such a place still exists, yes, old Florida lives here. A lone blinking yellow light directs the downtown traffic. Come and stay awhile in this wonderful, walkable, watery hamlet. Try the pace on for size.

Apalachicola is still the home port for a variety of seafood workers, including recreational fishing and shrimpers. More than 90% of Florida's oyster production was harvested from Apalachicola Bay in past years. Today the oyster industry has completely collapsed do to pollution and lack of water flow in the Apalachicola River. Every year the town hosts the Florida Seafood Festival. The bay is well protected by St. Vincent Island, Flag Island, Sand Island, St. George Island, and Cape St. George Island. 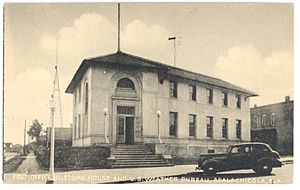 In 1979, Exxon relocated their experimental subsea production system from offshore Louisiana to a permitted artificial reef site off Apalachicola. This was the first effort to turn an oil platform into an artificial reef.

All content from Kiddle encyclopedia articles (including the article images and facts) can be freely used under Attribution-ShareAlike license, unless stated otherwise. Cite this article:
Apalachicola, Florida Facts for Kids. Kiddle Encyclopedia.