Kids Encyclopedia Facts
Not to be confused with Panama City Beach, Florida.

Panama City is a city in and the county seat of Bay County, Florida, United States. Located along U.S. Route 98, it is the largest city between Tallahassee and Pensacola. It is the more populated of two principal cities of the Panama City-Lynn Haven, Florida Metropolitan Statistical Area. As of the 2020 census,the population was 32,939. Panama City was catastrophically damaged when Hurricane Michael made landfall as a Category 5 hurricane on October 10, 2018. When Panama City was incorporated in 1909, its original city limits were 15th Street (Hwy 98) on the north, Balboa Avenue on the west and Bay Avenue on the east.

The development in this area of Northwest Florida had previous names such as "Floriopolis," "Park Resort" and "Harrison." In 1906 the development was titled "Panama City" and later incorporated as "Panama City" in 1909. According to the Panama City Public Library's A History of Panama City, a developer named George Mortimer West hoped to spur real estate development in Bay County during a period of intense popular interest in the construction of the Panama Canal by changing the town's name from Harrison to Panama City, because a straight line between Chicago and the capital of the Central American country of Panama intersected the Florida town. Additionally, since required meanders around land formations in a seaborne route to the canal added distance when starting at other ports, Panama City was the closest developed port in the US mainland to the Caribbean entrance of the Panama Canal.

The city is susceptible to hurricanes, such as Hurricane Earl, which brought winds of more than eighty miles per hour in 1998.

The Bay Line Railroad has an 82-mile (132 km) rail line running north to Dothan, Alabama, to a connection with CSX Transportation and Norfolk Southern.

Local transit is handled by the Baytown Trolley services. Service generally runs Monday-Saturday from 6 AM to 7 PM.

Intercity transit is handled by the city's Greyhound station. 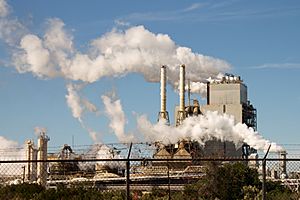 In 2006, Panama City was named the best place to invest in real estate in the US by CNN's Business 2.0 magazine.

Tyndall Air Force Base is east of the city. The HHT 1-153 CAV is stationed there. It is part of Florida Army National Guard's 53rd Infantry Brigade. The city is also home to the U.S. Navy's Naval Support Activity Panama City which is home to various research and training projects. The city is also approximately 100 miles south of Fort Rucker, Alabama, home to the US Army's Aviation Center of Excellence.

The city's main retail center was the Panama City Mall until it was permanently closed after Hurricane Michael. In August of 2020, Panama City Mall released the plans to the mall. The plans for the mall includes a hotel, shops, and restaurants. Another local retail center is the Bay City Pointe, on FL 368 (locally known as 23rd St.). Pier Park, on the beach across the Hathaway Bridge spanning St. Andrews Bay, is a third local retail center. Others retail areas in the Panama City Metro are the 15th Street Shopping Strip (A area between Harrison Ave/US Highway 231 and Beck Ave/US Bus 98/State Road 390), 23rd Street Shopping Strip, Downtown Panama City, Historic St. Andrews, and Millville Historic District.

All content from Kiddle encyclopedia articles (including the article images and facts) can be freely used under Attribution-ShareAlike license, unless stated otherwise. Cite this article:
Panama City, Florida Facts for Kids. Kiddle Encyclopedia.