Bay County is included in the Panama City, Florida Metropolitan Statistical Area. The county is best known for its white sand beaches and emerald green water, where large pods of dolphins swim year-round. These beaches attract hundreds of thousands of visitors from all over the world each year.

On February 12, 1913, representatives from five towns on St. Andrews Bay met in Panama City to select a name for a proposed new county. The name Bay was selected because it was satisfactory to the majority of the citizens and was descriptive of the territory that would be included. On July 1, 1913, Bay County was created by the Legislature from portions of Washington, Calhoun and Walton counties.

It was the site of Gideon v. Wainwright, which gave all persons accused of a crime the right to an attorney.

The county operates the Baytown Trolley, which runs several routes in and around Panama City.

Bay County is part of the Northwest Regional Library System (NWRLS), which serves Gulf and Liberty Counties as well. 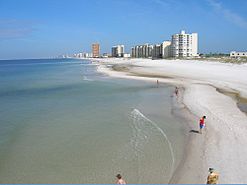 Bay District Schools operates public schools serving all portions of the county except Mexico Beach, which is served by Gulf County Schools.

All content from Kiddle encyclopedia articles (including the article images and facts) can be freely used under Attribution-ShareAlike license, unless stated otherwise. Cite this article:
Bay County, Florida Facts for Kids. Kiddle Encyclopedia.