Gideon v. Wainwright, 372 U.S. 335 (1963), is a landmark case in United States Supreme Court history. The Court decided that if a person is charged with a crime, and they cannot pay for a lawyer, the state has to give them one for free. This case caused the public defender program to be created in the United States. (A public defender is a lawyer who defends clients who cannot pay them.)

Between midnight and 8:00 a.m. on June 3, 1961, someone broke into the Bay Harbor Pool Room in Panama City, Florida. The person broke a door, smashed a cigarette machine and a record player, and stole coins from a cash register. Later that day, a witness said he had seen Clarence Earl Gideon in the pool room at around 5:30 that morning. The witness said Gideon left with a wine bottle and money in his pockets. Based only on this information, the police arrested Gideon and charged him with breaking and entering with intent to commit petty larceny. This charge means a person broke into a place, meaning to steal someone else's property. (In Florida, at the time, "petty" larceny meant that the person stole something that was worth less than $50.) Under Florida law, if Gideon was found guilty, he could be put in prison for up to five years.

Laws about rights to counsel

In 1961, state courts had to follow the Supreme Court's decision in Betts v. Brady. In this case, the Court ruled that if a defendant was charged with a capital crime, he had to be be assigned a lawyer if he could not pay for one. However, as long as the defendant was not charged with a capital crime, the states did not have to assign free lawyers to every defendant who could not afford them. The Court ruled that having a lawyer was not a basic right, and was not necessary for a fair trial.

In their decision, the Court did rule that there were special cases where a court should assign a lawyer. In these special cases, not having a lawyer would make it difficult for a defendant to get a fair trial. These "specialized circumstances" included things like a defendant not having education or not knowing the rules of the court.

What this meant was that in 1961, throughout the state of Florida, most defendants did not have lawyers. They had two choices: to plead guilty, or to defend themselves at trial. A Florida lawyer remembers that "[before] 1963, lawyers were likely to appear in Florida courtrooms only for the wealthy."

In a letter he wrote from prison, Gideon once wrote: 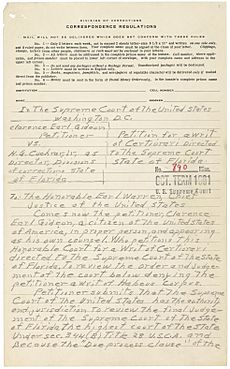 First, Gideon filed a writ of habeas corpus with the Florida State Supreme Court. This is a request to be set free from unfair imprisonment. The Florida Supreme Court summarily denied his request – meaning they refused to even hold a court hearing or hear Gideon's arguments.

From his prison cell, using the prison library and writing in pencil on prison paper, Gideon then appealed to the United States Supreme Court. He asked the Supreme Court to review his case "because the 'due process clause' of the fourteenth admendment of the constitution and the fifth and sixth articales of the Bill of rights has been violated" sic.

The Supreme Court agreed to hear Gideon's appeal. They had decided to think about whether Betts v. Brady should be "reconsidered" (re-thought). 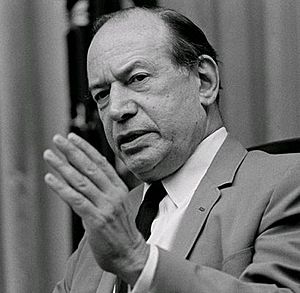 A lawyer named Bruce Jacob argued the case against Gideon in front of the Supreme Court. He made a few different arguments.

Jacob argued that the Constitution allows states to make their own rules about the criminal procedure (how to run criminal trials). He talked about federalism – the separation of powers between federal and state governments that is written into the Constitution. By making a rule saying the states always had to give poor defendants free lawyers, the federal government would be over-stepping its powers. The states would be unable to make their own rules, and this would take away a right the Constitution gave to the states.

Jacob also argued that a person does not need a lawyer to get a fair trial. He said that judges, and even prosecutors, help protect the rights of people who defend themselves in court.

In addition, Jacob said that if the Court ruled in favor of Gideon, the effects would be harmful. If the Court ruled that a lawyer was needed for a fair trial, then the state would also have to give poor defendants free lawyers for other types of trials, like appeals and civil trials. The state would never have enough lawyers for this or enough money to pay them, he said. Also, out of Florida's 8,000 prisoners, 65% – 5,200 prisoners – had not had lawyers. Jacob argued that many of these prisoners could go free if the Court ruled in favor of Gideon. 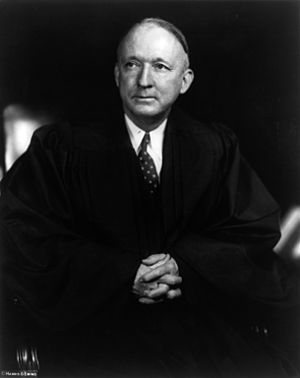 After the Supreme Court

The Supreme Court's ruling did not mean that Gideon could automatically go free. It meant he got a new trial – this time, with a free lawyer assigned to him.

Gideon asked for a lawyer named Fred Turner, who had a very good reputation, and the judge agreed. With Turner arguing the case, it took jurors less than an hour to find Gideon not guilty. Gideon was set free that day.

Gideon died on January 18, 1972, from cancer and tuberculosis. He was buried in an unmarked grave in Missouri.

Almost thirteen years later, the American Civil Liberties Union paid for a headstone to be put on Gideon's grave. On the gravestone, there is a quote based on something Gideon wrote in a letter to Abe Fortas: "I believe that each era finds an improvement in law for the benefit of mankind." p.78

Based on the Supreme Court decision, each of Florida's 5,200 prisoners who had been convicted without counsel had the right to a new trial – this time with a lawyer. However, about 1,200 of these prisoners were set free without a new trial. This happened because witnesses in their cases had died or moved away, and the state of Florida did not have enough evidence to try them again.

When Gideon was decided, there were still 13 states that did not always give lawyers to poor criminal defendants. Like in Florida, many of these poor defendants did not get fair trials because they did not have a lawyer's help. After the Gideon decision, every person who is charged with a crime, in any court in the United States, has the right to a lawyer – even if they cannot pay for one. Defendants can decide they do not want a lawyer, but when they do that, they are giving up their right to a lawyer because they want to.

Four years after Gideon, in a case called Burget v. Texas, the Supreme Court ruled that the Gideon decision applied "retroactively." This means it applies even to defendants who were convicted before Gideon was decided in 1963. In other words, the Court was admitting that defendants should have had the right to counsel all along, even before Gideon. The Court decided in Gideon that people could not get a fair trial without lawyers; that was just as true for people who were convicted before 1963. These people, too, now deserved new trials, with free lawyers to help them.

The Gideon decision still guarantees free counsel to every poor individual charged with a crime in the United States. However, many legal scholars agree that there are many problems with the public defender system in the 21st century. Because of these problems, they argue, many poor defendants are not getting the rights the Gideon decision gave them. 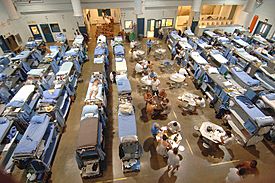 According to these scholars, one of the biggest problems with today's public defender programs is that they do not get enough money from the government to deal with the number of poor defendants they have to represent. This means:

When public defenders cannot do their jobs well because they have too many cases, have too little experience, or are too overwhelmed, defendants get more severe punishments when they are convicted.

All content from Kiddle encyclopedia articles (including the article images and facts) can be freely used under Attribution-ShareAlike license, unless stated otherwise. Cite this article:
Gideon v. Wainwright Facts for Kids. Kiddle Encyclopedia.