Calhoun County is a county located in the U.S. state of Florida. As of the 2010 census, the population was 14,625, making it the fifth-least populous county in Florida. Its county seat is Blountstown.

Calhoun County was created in 1838. It was named for John C. Calhoun, member of the United States Senate from South Carolina and the seventh U.S. vice president, serving under John Quincy Adams and Andrew Jackson. Typical in the Florida Panhandle, a majority of Calhoun County's residents remain much more attached to Southern culture and lifestyle habits than is common in the Central and Southern regions of the state, and the area holds much more in common with states such as Alabama, Georgia, or Mississippi than with much of Florida.

In 1930 a "federal agent" shot the County Sheriff. 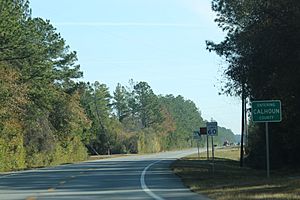 Calhoun County has no Interstate or U.S. Highways, but does contain some important state roads.

Along with the six branches within the Calhoun County Public Library System, Calhoun County is also a part of the Panhandle Public Library Cooperative System. PPLCS also includes Holmes and Jackson counties. Branches are located in the following communities and offer public computers with internet access, free wi-fi, programming for all ages, downloadable e-books and e-audiobooks, and numerous online databases and resources.

All content from Kiddle encyclopedia articles (including the article images and facts) can be freely used under Attribution-ShareAlike license, unless stated otherwise. Cite this article:
Calhoun County, Florida Facts for Kids. Kiddle Encyclopedia.