Look and Tremble facts for kids 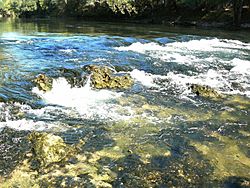 The Chipola River from the Florida Caverns State Park southward is a canoe trail. Look and Tremble is considered a class-one rapids (or "a mild class II on its best day".) This is the lowest in the International Scale of River Difficulty scheme, but any rating of the rapids is unusual for the generally flat landscape of Florida around the waterway. The relative placidity has resulted in Look and Tremble also being called "Glance and Giggle" by local area residents. The area is also popular for tubing and swimming. Holes in the limestone bottom of the river at Look and Tremble are repositories for American Indian artifacts and animal fossils that have washed downstream.

All content from Kiddle encyclopedia articles (including the article images and facts) can be freely used under Attribution-ShareAlike license, unless stated otherwise. Cite this article:
Look and Tremble Facts for Kids. Kiddle Encyclopedia.