For other uses of artifact, including errors, see artifact (disambiguation). 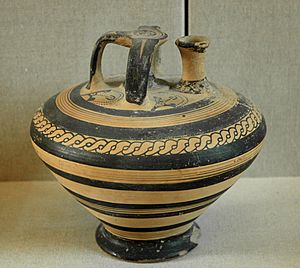 An artifact is something made or given shape by humans, such as a tool or a work of art, especially an object of archaeological interest.

In archaeology, the word is defined as: an object recovered by archaeological endeavor, which may be a cultural artifact having cultural interest. 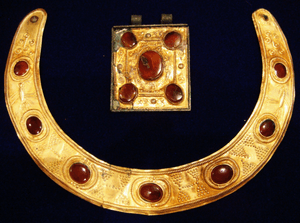 Examples include stone tools, pottery vessels, metal objects such as weapons, and items of personal adornment such as buttons, jewelry and clothing. Bones that show signs of human modification are also examples. Natural objects, such as fire cracked rocks from a hearth or plant material used for food, are classified by archeologists as ecofacts rather than as artifacts.

Artifacts can come from any archaeological context or source such as:

Artifacts are distinguished from the main body of the archaeological record which are non-portable remains of human activity, such as hearths, roads, deposits, trenches or similar remains, and from biofacts or ecofacts, which are objects of archaeological interest made by other organisms, such as seeds or animal bone.

Natural objects that humans have moved but not changed are called manuports. Examples include seashells moved inland, or rounded pebbles placed away from the water action that made them.

These distinctions are often blurred. For instance, a bone removed from an animal carcass is a biofact, but a bone carved into a useful implement is an artifact. It can be difficult to distinguish the differences between actual man-made lithic artifacts and geofacts – naturally occurring lithics that resemble man-made tools.

All content from Kiddle encyclopedia articles (including the article images and facts) can be freely used under Attribution-ShareAlike license, unless stated otherwise. Cite this article:
Artifact (archaeology) Facts for Kids. Kiddle Encyclopedia.