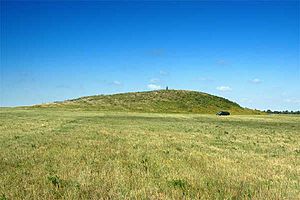 An archaeological site with human presence dating from 4th century BC, Fillipovka, South Urals, Russia. This site has been interpreted as a Sarmatian Kurgan.

In archaeology, a biofact (or ecofact) is organic material found at an archaeological site that carries archaeological significance. Biofacts are natural objects found alongside artifacts or features, such as animal bones, charcoal, plants, and pollen. Biofacts are passively consumed or handled by humans; as opposed to artifacts, which are purposefully manipulated. Biofacts reveal how people respond to their surroundings.

A common type of biofact is a plant seed. Plant remains provide a variety of information ranging from diet to medicine to clothes production. Pollen preserved on archaeological sites informs researchers about the ancient environment, and the foods processed and/or grown by prehistoric people. Pollen, when examined over time, also informs on environmental and dietary changes. A seed can be linked to the species of plant that produced it; if massive numbers of seeds of a cultivated species are found at a site, it may be inferred that the species may have been grown for food or other products that are useful to humans, such as clothing, bedding or building materials. 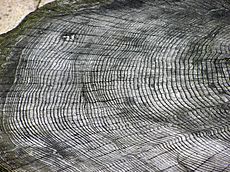 The growth rings of a tree. Each ring represents one year; the outside rings, near the bark, are the youngest.

Another type of biofact is wood. Wood is made up cellulose, carbohydrates, and lignin. Every year that passes, a new ring is added to the trunk of tree, allowing for dendrochronological dating. Charcoal is burned wood that archaeologists are able to extract. It can be dated using carbon-14, and through other methods, information such as local environment and human adaptation can be revealed from the charcoal. To help determine the date during which a site was occupied, dendrochronological analysis can be used on wood samples. Wood that has been altered by humans is properly an artifact, not a biofact.

All content from Kiddle encyclopedia articles (including the article images and facts) can be freely used under Attribution-ShareAlike license, unless stated otherwise. Cite this article:
Biofact (archaeology) Facts for Kids. Kiddle Encyclopedia.