Gadsden County is a county located in the panhandle of the U.S. state of Florida. As of the 2010 census, the population was 46,389. Its county seat is Quincy.

Gadsden County is the only majority (over 50%) African-American county in Florida.

Gadsden County was created in 1823. It was named for James Gadsden of South Carolina, who served as Andrew Jackson's aide-de-camp in Florida in 1818. Gadsden County is historically known for its tobacco crop which is obsolete today. 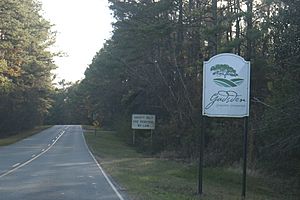 The sign for Gadsden County while entering Florida from Georgia

Gadsden County has at least four existing railroad lines, three of which are owned by CSX. The first two CSX lines being P&A Subdivision, a line formerly owned by the Louisville and Nashville Railroad, and the other is the Tallahassee Subdivision, a former Seaboard Air Line Railroad line. These two lines meet in Chatahoochee and served Amtrak's Sunset Limited until it was truncated to New Orleans in 2005 by Hurricane Katrina. A third line is the Apalachicola Northern Railroad, a line that spans as far south as Port St. Joe. The line enters from Liberty County, then crosses SR 12 in Greensboro, runs under I-10, follows CR 268 in Hardaway, and then turns west into Chatahoochee. The fourth line is the third CSX Line, the Bainbridge Subdivision, which runs along the west side of US 27 from Leon County by way of a bridge over the Ochlockonee River to the Georgia State Line. While some spurs still exist, other lines within the county were abandoned. 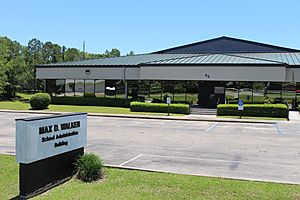 All content from Kiddle encyclopedia articles (including the article images and facts) can be freely used under Attribution-ShareAlike license, unless stated otherwise. Cite this article:
Gadsden County, Florida Facts for Kids. Kiddle Encyclopedia.