Kids Encyclopedia Facts
Not to be confused with Decatur, Georgia.

Decatur County is a county located in the U.S. state of Georgia. As of the 2010 census, the population was 27,842. The county seat is Bainbridge.

The county was created by an act of the Georgia General Assembly on December 8, 1823, from a portion of Early County. Three other counties were created from land that was originally part of Decatur County.

Decatur County is named for United States Navy Commodore Stephen Decatur, a hero of the War of 1812. 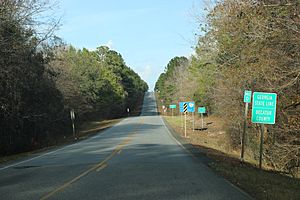 The welcome sign for Decatur County on State Route 97

Spring Creek Charter Academy was formed in 2019 and includes grades Pre-K through 8th Grade as of 2021–2022 school year with the next year being added as each grade progresses through the years.

Abraham Baldwin Agricultural College has a satellite campus in Bainbridge.

All content from Kiddle encyclopedia articles (including the article images and facts) can be freely used under Attribution-ShareAlike license, unless stated otherwise. Cite this article:
Decatur County, Georgia Facts for Kids. Kiddle Encyclopedia.