Bainbridge is a city in Decatur County, Georgia, United States. The city is the county seat of Decatur County. As of the 2010 census, the city had a population of 12,697.

The town was named after U.S. Navy Commodore William Bainbridge, commander of the USS Constitution ("Old Ironsides"), and was incorporated on December 22, 1829.

In 1824, Bainbridge was designated seat of the newly formed Decatur County.

Bainbridge is located in the center of Decatur County. The city is in southwestern Georgia along U.S. Routes 27 and 84, which form a bypass around the southern part of the city. Bainbridge is 40 miles (64 km) northwest of Tallahassee, Florida; 82 miles (132 km) west of Valdosta; and 54 miles (87 km) east-southeast of Dothan, Alabama.

Bainbridge is located on the Flint River, which flows southwest to meet the Chattahoochee. Together they form the Apalachicola River which flows to the Gulf of Mexico. At the junction of the two rivers, the Jim Woodruff Dam forms Lake Seminole. A system of locks at the dam allows barge traffic to travel between the inland port at Bainbridge and the Gulf of Mexico. 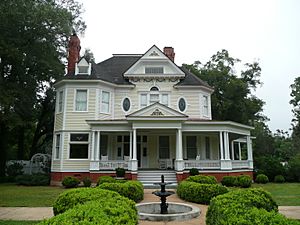 River Town Days is held each year the second weekend of March.

The Decatur County Courthouse was constructed in 1902, and is listed on the National Register of Historic Places.

It was announced in December 2019 that Brazil-based gun manufacturer Taurus had been granted a $39 million tax-incentive package to move from the Miami, Florida area to Bainbridge in return for creating 300 jobs. The package includes $20 million for construction, $7.9 million in tax credits, $4.5 million for infrastructure, $4.3 million in property-tax abatements, and $3 million for equipment, in addition to a land lease arrangement of $1/year for 73 acres (20 hectares) of land. The subsidy totals $130,000 per job.

The Decatur County School District holds pre-school to grade 12, and consists of two elementary schools, one primary school, one middle school, and a high school. The district has 384 full-time teachers and over 5,782 students.

The city is a seaport linked to the Gulf of Mexico via Florida's Apalachicola River. Officially known as Port Bainbridge, these facilities are managed entirely by the Georgia Ports Authority.

All content from Kiddle encyclopedia articles (including the article images and facts) can be freely used under Attribution-ShareAlike license, unless stated otherwise. Cite this article:
Bainbridge, Georgia Facts for Kids. Kiddle Encyclopedia.