Dothan /ˈdoʊθən/ is a city in the southeastern corner of the U.S. state of Alabama, situated approximately 20 miles (32 km) west of the Georgia state line and 16 miles (26 km) north of Florida. It is the seat of Houston County, with portions extending into nearby Dale County and Henry County. Its name derives from Genesis 37:17: "let us go to Dothan." According to the 2010 census the city's population was 65,496.

Dothan is the principal city of the Dothan, Alabama metropolitan area, which encompasses all of Geneva, Henry, and Houston counties; the small portion that lies in Dale County is part of the Ozark Micropolitan Statistical Area. The combined population for the entire Dothan metropolitan area in 2010 was 145,639. The city serves as the main transportation and commercial hub for a significant part of southeastern Alabama, southwest Georgia, and nearby portions of the Florida Panhandle. Since approximately one-fourth of the U.S. peanut crop is produced nearby, with much of it being processed in the city, Dothan is sometimes referred to as "The Peanut Capital of the World". Dothan also hosts the annual National Peanut Festival at the dedicated "Peanut Festival Fairgrounds".

The area that is now Dothan was inhabited for thousands of years by successive cultures of indigenous peoples. In historic times it was occupied by the Alabama and Creek Native American tribes who were hunters and gatherers in the vast forests of pine that covered this region. These tribes had developed complex cultures, and often used to meet and camp for trading near a large spring at the crossroads of two trails.

Between 1763 and 1783, the region that is now Dothan was part of the colony of British West Florida. European-American settlers moving through the area during the late 18th and early 19th centuries discovered the Indian spring, naming it "Poplar Head". Most felt that the sandy soil common to this region would be unsuitable for farming, so they moved on. A crude stockade was constructed on the Barber Plantation, where settlers could take refuge whenever they felt threatened. This fort disappeared by the 1840s, after the end of the Indian Wars in Alabama and the removal of most members of the Five Civilized Tribes to Indian Territory west of the Mississippi River. Some Indians stayed in the region, becoming state and U.S. citizens by giving up their tribal membership.

The first permanent white (European-American) settlers consisted of nine families who moved into the area during the early 1830s to harvest the abundant timber. Their settlement, named "Poplar Head" after the spring, failed to thrive and was all but abandoned by the time of the Civil War.

After the war, a local Pony Express route was founded; together with other developments during the Reconstruction Era, the town began to grow. On November 11, 1885, the locals voted to incorporate, naming their new city "Dothan" after discovering that "Poplar Head" was already registered with the U.S. post office for a town in northern Alabama.

In 1893, Dothan secured a stop on the first railroad to be built in the region. This development brought new prosperity and growth, as local farmers had a means to market and transport their produce. The pine forests were harvested for turpentine and wood, which was transformed into ship masts, lumber and other wood products. As the pines were cut and land subsequently cleared, cotton was cultivated as a staple of the local economy. The crops were devastated by the boll weevil in the early 1900s.

Farmers turned to peanut production, which was successful and brought financial gain to the city. It became a hub for the production and transport of peanuts and peanut-related products. Today, one-quarter of the U.S. peanut crop is harvested within 75 miles (121 km) of Dothan. A two-week fall festival known as the National Peanut Festival celebrates this heritage.

Dothan also sought out industrial development, with textile and agricultural concerns being joined by manufacturing plants for the Sony, Michelin, and General Electric corporations in the 20th century. The city had an exhibit at the 1939 New York World's Fair. 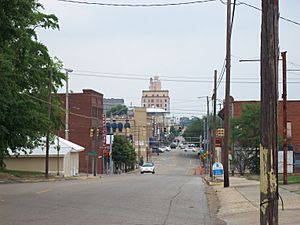 Originally part of Henry County, Dothan became the county seat of the newly formed Houston County on May 9, 1903. The city continued to flourish and grow throughout the twentieth century, with an airport being constructed in 1965 and Wallace Community College in 1969. Troy University Dothan Campus was established in 1961 and is located in the northwestern part of the city.

The Southern Company constructed the Joseph M. Farley Nuclear Generating Station near the city between 1970 and 1981; this 1,776-megawatt facility currently generates approximately 13,000 GW-h per year. In the late 1970s, factories were constructed in the city by Sony and Michelin corporations. In 2010 Sony announced its closure of its Dothan plant. Pemco Aviation declared bankruptcy in March 2012 and in May that year announced the closing of its Dothan facility.

In addition to styling itself "The Peanut Capital of the World", Dothan is the self-proclaimed "Hub of the Wiregrass". It is also commonly referred to as "The Circle City", because it is encircled by Alabama State Route 210, a four-lane highway also known as the Ross Clark Circle. In recent decades, the city has expanded in several directions beyond the confines of this highway.

Fort Rucker, the "Home of Army Aviation", is located about 25 miles (40 km) northwest of the city, just north of the city of Daleville. It is the second-largest city in the Wiregrass Region after Tallahassee, Florida.

Dothan has a humid subtropical climate (Köppen Cfa). This produces hot, humid summers and generally mild winters, with average high temperatures ranging from 92 °F (33 °C) in the summer to 59 °F (15 °C) high during winter. Snowfall is an extremely rare event – a two-inch snowfall occurs about once every ten years, which results in a yearly average of 0.2 inches (5.1 mm). Tornadoes are a frequent risk during the spring, summer and fall; the city's tornado activity is slightly below the Alabama state average, but 79% above the U.S. average.

Approximately 79% of residents completed high school, while 23% have college degrees. 8% of the population has a graduate or professional degree; 6% are unemployed. Average commute-to-work time is 18 minutes.

The state-recognized Cher-O-Creek Intra Tribal Indians are located in Dothan. They are descended from members of the Cherokee and Creek peoples who occupied this area and resisted removal to Indian Territory in the 1830s.

The Downtown Christmas Festival occurs annually on the first Saturday in December. Some of the most popular activities and attractions include the Snow Zone, sledding, cookie decorations, marshmallow roasting, local artisans, a pet parade, various food vendors and of course, Santa! The festival takes place downtown on Foster and Troy streets.

The National Peanut Festival occurs annually in November. The festival hosts competitions in different areas for all ages. A large midway, entertainment by nationally known recording artists, and the largest parade in the area are featured attractions. Visitors can find many rides such as Speed, Starship 3000, Wild Mouse, etc. Many booths are set there to help advertise for their business. On the last day of the fair, there is a peanut festival parade. This includes bands from high schools around Dothan, pageant winners, and more. Many people line the downtown streets of Dothan to celebrate the parade.

Dothan is also home to two professional barbecue competitions. The Tri-State BBQ Festival is held the second weekend in April, and is sanctioned by the Florida Bar-B-Que Association. It was begun in 2006 and is currently put on at the Houston County Farm Center. PorktoberQue, an Oktoberfest and Kansas City Barbeque Society (KCBS) sanctioned event, is held the last weekend of September in Dothan. It, too, is held at the Farm Center.

The US Army Aviation Museum, located on nearby Fort Rucker, houses one of the largest helicopter collections in the world. The museum focuses on the role of fixed and rotary-wing flight in the U.S. Army. The exhibits depict over 50 years of Army aviation, and include a number of life size dioramas, films, and interpretive material. Several period aircraft are available for viewing.

The George Washington Carver Monument, located at the National Peanut Festival Fairgrounds, pays tribute to one of the nation's greatest educators and agricultural researchers, whose work resulted in the creation of 325 products from peanuts, more than 100 products from sweet potatoes and hundreds more from a dozen other plants native to the South. These products contributed to rural economic improvement, by offering alternative crops to cotton that were beneficial for the farmers and for the land.

The George Washington Carver Museum relates the story of the African-American genius and offers information on African cultures and their influences on the world, prominent African-American scientists, explorers and inventors, and the positive contributions made by African Americans in military affairs and the area of social development.

The Wiregrass Museum of Art, located in the city's original power and water plant (1913), features ongoing exhibitions of visual and decorative art. The museum's permanent collection includes works by contemporary Southeastern artists such as Dale Kennington, Frank Flemming, Dale Lewis and Cal Breed, as well as material by nationally recognized artists including Frank Stella and Jim Dine. The museum was organized in 1989 by private citizens and the City of Dothan; it is operated by the Wiregrass Museum of Art, Inc., a 501(c)3 organization.

Landmark Park is a 135-acre (55 ha) park built to preserve the natural and cultural heritage of southeast Alabama's Wiregrass Region and serves as Alabama's official museum of agriculture. Visitors can experience history on an 1890s living history farm, complete with an old farmhouse, smokehouse, cane mill, and syrup shed, as well as sheep, mules, cows, chickens, goats and pigs. There is a Victorian gazebo, a one-room schoolhouse, a drugstore and soda fountain, a country store, and a turn-of-the-century church. Landmark Park also has an elevated boardwalk, nature trails, picnic areas, a playground and an interpretive center with a state-of-the-art "digitarium" (planetarium). Special events include folklife festivals, antique car shows, traveling exhibits, concerts and workshops year-round.

The Joseph statue at Millennium Park is a ten-foot, cast bronze sculpture, located in the historic downtown area. It represents the Bible verse, "For I heard them say, Let us go to Dothan" (Genesis 37:17), on which the town based its name.

Peanuts Around Town is a public art project organized by The Downtown Group, consisting of 5-foot-tall (1.5 m) peanut sculptures decorated in various fashions and displayed around Dothan.

"Wiregrass Festival of Murals" is an ongoing project offering historic murals painted by nationally and internationally acclaimed muralists on walls of buildings in the downtown historic district. Guided tours are available upon request.

Patti Rutland Jazz is a professional contemporary jazz and hip-hop dance company located in Dothan. This company produces two full-length jazz and hip-hop theatrical dance productions yearly (one in late February and one in early June) at their home in the Cultural Arts Center, as well as at Dothan's historical landmark Opera House. Patti Rutland Jazz operates as a non-profit 501(c)(3) organization whose core mission is to offer its dancers to the Wiregrass Region to assist under-served youths with free dance classes. This mutually beneficial program hopes to make Dothan a destination for, and a source of, future professional dance talent in the United States. 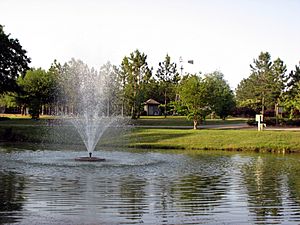 All content from Kiddle encyclopedia articles (including the article images and facts) can be freely used under Attribution-ShareAlike license, unless stated otherwise. Cite this article:
Dothan, Alabama Facts for Kids. Kiddle Encyclopedia.