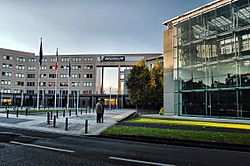 Michelin is a French tyre company. It is based in Clermont-Ferrand, France. It is the second largest tyre manufacturer in the world. In addition to the Michelin brand, it also owns the BFGoodrich, Kleber, Tigar, Riken, Kormoran and Uniroyal (in North America) tyre brands. The mascot is Bibendum, colloquially known as the Michelin Man.

All content from Kiddle encyclopedia articles (including the article images and facts) can be freely used under Attribution-ShareAlike license, unless stated otherwise. Cite this article:
Michelin Facts for Kids. Kiddle Encyclopedia.