Kids Encyclopedia Facts
Not to be confused with Jacksonville, Florida.

Jackson County is a county located in the U.S. state of Florida, on its northwestern border with Alabama. As of the 2020 census, the population was 48,889. Its county seat is Marianna.

Jackson County was created by the Florida Territorial Council in 1822 out of Escambia County, along with Duval County out of St. Johns County, making them the third and fourth counties in the Territory. The county was named for Andrew Jackson, who had served as Florida's first military governor for six months in 1821. Jackson County originally extended from the Choctawhatchee River on the west to the Suwannee River on the east. The county had been reduced close to its present boundaries by 1840 through the creation of new counties from its original territory. Minor adjustments to the county boundaries continued through most of the 19th century, however.

There were no towns in Jackson County when it was formed. The first county court met at what was called "Robinson's Big Spring" (later called Blue Springs) in 1822 and then at the "Big Spring of the Choctawhatchee" in 1823. The following year the county court met at "Chipola Settlement" which is also known as Waddell's Mill Pond.

Marianna became the county seat, but not without controversy. It was founded by Robert Beveridge, a native of Scotland, in September 1821. The first town established in Jackson County was Webbville in January 1821. Webbville, a community of land squatters, was located 9 miles (14 km) northwest of present-day Marianna and was designated as the county seat. Webbville thrived until 1828 when Beveridge and other Marianna settlers went to Tallahassee and enticed the Florida Legislature with free land, construction of a courthouse, a public square and $500 to purchase a quarter section of land to be sold at public auction as a way to finance the new government, if the county seat was moved to Marianna.

Beveridge and his supporters succeeded and Marianna became the county seat of the county justice and civil authority, even though it was never officially proclaimed the county seat. Marianna began to grow and prosper when the county government moved into the new courthouse in 1829. Webbville's prominent citizens moved to Marianna and the L&N Railroad decided to bypass the town. Webbville does not exist today.

From 1869-71, Jackson County was the center of a low-level guerrilla war known as the Jackson County War. Members of the Ku Klux Klan consisting of Confederate Army veterans assassinated over 150 Republican Party officials and prominent African-Americans as part of a successful campaign to retain white Democratic power. 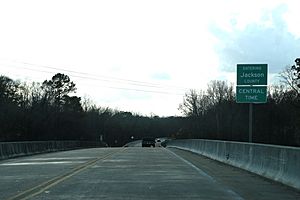 Jackson County has at least two existing railroad lines. The primary one is the CSX P&A Subdivision, a line formerly owned by the Louisville and Nashville Railroad that served Amtrak's Sunset Limited until it was truncated to New Orleans in 2005 by Hurricane Katrina. Another one is the Bay Line Railroad, a line that was originally the Atlanta and St. Andrews Bay Railway main line, and runs along US 231 from Panama City through Campbellton. The lines contain a junction with each other in Cottondale. Other lines within the county were abandoned.

The Jackson County School Board operates public schools in the county. Jackson County is also home to Baptist College of Florida, an institution of higher education in Graceville affiliated with the Florida Baptist Convention, and Chipola College, a state college in Marianna.

All content from Kiddle encyclopedia articles (including the article images and facts) can be freely used under Attribution-ShareAlike license, unless stated otherwise. Cite this article:
Jackson County, Florida Facts for Kids. Kiddle Encyclopedia.