Marianna is a city in Jackson County, Florida, United States. The population was 6,230 at the 2000 census. It is the county seat of Jackson County and is home to Chipola College. The official nickname of Marianna is "The City of Southern Charm." 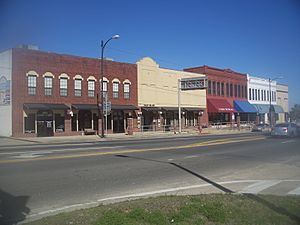 Part of the historic downtown area

Marianna was founded in 1828 by Scottish entrepreneur Scott Beverege and named the town after his wife, Mary and her friend Anna combining their names to form Marianna, it was named the county seat the following year, supplanting the earlier settlement of Webbville, which soon dissolved and no longer exists. Marianna was platted along the Chipola River and many plantation owners from North Carolina relocated to Jackson County for the fertile soil.

It is the final resting place of the Confederate governor of Florida, Governor John Milton, and the scene of a Civil War battle between a small home guard of about 150 boys, older men, and wounded soldiers, and a contingent of approximately 700 Federal troops.

There were 2,398 households out of which 28.8% had children under the age of 18 living with them, 34.3% were married couples living together, 20.7% had a female householder with no husband present, and 41.8% were non-families. 38.0% of all households were made up of individuals and 19.3% had someone living alone who was 65 years of age or older. The average household size was 2.22 and the average family size was 2.96.

Marianna Municipal Airport, a former World War II Army Air Corps base, is a public-use airport located 4 miles (6.4 km) northeast of the central business district. Also, the city is served by a bus transit system that runs through the whole city; J-trans. 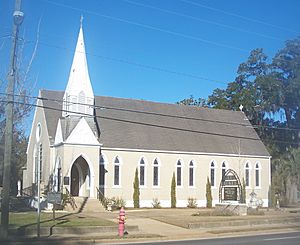 Florida Caverns State Park is located near the town. There is also cave diving in underwater Blue Springs. St. Luke's Episcopal Church and cemetery are state landmarks following a principal role in the U.S. Civil War battle of Marianna in 1864. Neal's Landing on the Chattahoochee River is not far from Marianna and is a fishing and camping area. Neal's Landing is where the old Indian village of Ekanchattee once existed. The Chipola River is a source of recreation during all but the winter months.

All content from Kiddle encyclopedia articles (including the article images and facts) can be freely used under Attribution-ShareAlike license, unless stated otherwise. Cite this article:
Marianna, Florida Facts for Kids. Kiddle Encyclopedia.