Holmes County is a county located in the northwestern part of the U.S. state of Florida, in the Panhandle. As of the 2010 census, the population was 19,927. Its county seat is Bonifay.

Holmes County was created in 1848.

The county's namesake is a point of debate. Holmes Creek - the county's eastern boundary - bore that name before the county was created, but it was originally named Weekaywehatchee (a Creek Indian name meaning "spring creek"). One claim is that the county was named for Thomas J. Holmes, who came from North Carolina to settle in the area about 1830. Another is that it is named after Holmes, an American Indian chief who settled in the area with his band of Red Stick Creek Indians after 1814. He was subsequently killed in 1818 by a raiding party sent by Andrew Jackson during the First Seminole War.

Holmes County has had four county seats in its history. The first was Hewett's Bluff (later renamed Bear Pen, then Cerro Gordo), then Pittman's Ferry, then Westville, and finally Bonifay. Bonifay has been the county seat since 1905.

Historic places in the county include:

The so-called "Dominickers", a number of related mixed-race (white, black, and Euchee Indian) families, lived for decades after the Civil War and well into the twentieth century in a rural area near Ponce de Leon, with a separate church and segregated public elementary school. Although considered a separate ethnicity from both whites and blacks, many Dominickers married into local white families, so that group boundaries blurred; some descendants still live in the area. The 1950 federal census identified 60 members of this group living in Holmes County at that time. Few facts are known about their origins, and little has been published about them. 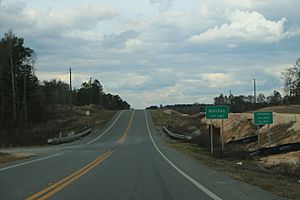 The Holmes County Public Library is the county's library system. It is located at 303 North J. Harvey Etheridge Street, Bonifay, Florida 32425. The library is open Tuesday-Friday 8:00am–5:00pm, and Saturday 8:00am–12:00pm and offers public computers with internet access, free wi-fi, programming for all ages, and access to e-books, e-audiobooks, and numerous online databases and resources.

All content from Kiddle encyclopedia articles (including the article images and facts) can be freely used under Attribution-ShareAlike license, unless stated otherwise. Cite this article:
Holmes County, Florida Facts for Kids. Kiddle Encyclopedia.