Walton County is located on the Emerald Coast in the northwestern part of the U.S. state of Florida, with its southern border on the Gulf of Mexico. As of the 2010 census, the population was 55,043. Its county seat is DeFuniak Springs. The county is home to the highest natural point in Florida: Britton Hill, at 345 feet (105 m).

Walton County was created in 1824. It was named for the son of George Walton the Signer, Colonel George Walton, Jr (born 15 Aug 1786 in Augusta, Richmond Co, Georgia; died 20 Mar 1859 in Petersburg, Virginia) who was Secretary of the Florida territory from 1821 to 1826.

The county was settled in the early 18th Century by Scots who migrated from the Carolinas. The original settlements were in the Euchee (Yuchi) Valley near the landing on the Choctawhatchee River maintained by an Indian named Sam Story. They established one of the first Presbyterian churches in Northwest Florida which is still a functioning parish with an historical cemetery. 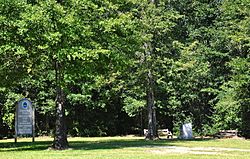 The summit of Britton Hill, the state of Florida's highest point at 345 feet, is located in northern Walton County

Walton County has 4 branches, including the historic DeFuniak Springs Library. 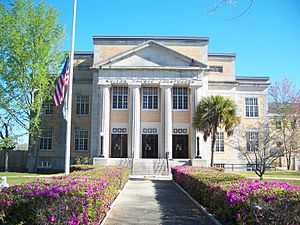 All content from Kiddle encyclopedia articles (including the article images and facts) can be freely used under Attribution-ShareAlike license, unless stated otherwise. Cite this article:
Walton County, Florida Facts for Kids. Kiddle Encyclopedia.