William Nathaniel "Buck" Showalter III (born May 23, 1956) is an American former Major League Baseball (MLB) manager. He served as manager of the New York Yankees (1992–1995), Arizona Diamondbacks (1998–2000), Texas Rangers (2003–2006), and Baltimore Orioles (2010–2018). He also is a former professional Minor League Baseball player and television analyst formerly for ESPN and currently for the YES Network for Yankees telecasts. A three-time American League (AL) Manager of the Year, Showalter has earned a reputation for building baseball teams into postseason contenders in short periods of time. He helped the Yankees rise from the bottom half of the AL East to first place before a players' strike prematurely ended the 1994 campaign. Under his watch, the Diamondbacks made their first-ever playoff appearance in only the second year of the team's existence. He left both franchises just prior to seasons when they won the World Series.

Showalter, who was born in DeFuniak Springs, Florida, on May 23, 1956, grew up in nearby Century. His father, William Nathaniel II, served 23 years as a teacher and principal at Century High School, from which the younger Showalter eventually graduated. Before becoming a teacher, his father had been a Little All-American fullback in 1940 at Milligan College, and had considered a career in the National Football League with the Pittsburgh Steelers, but chose to become a high school coach instead. 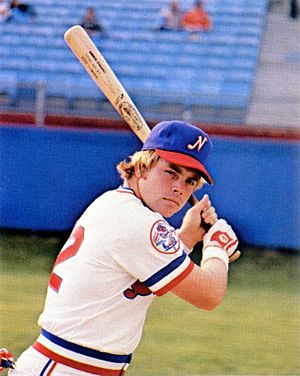 Showalter with the Nashville Sounds in 1980

Showalter was known as "Nat", and had not acquired the nickname "Buck", prior to turning professional. Nate Showalter played baseball at Chipola Junior College (now Chipola College) in Marianna, Florida, in 1976. From there he transferred to Mississippi State University.

In 1976, he played collegiate summer baseball in the Cape Cod Baseball League (CCBL) for the Hyannis Mets, where he won the league batting title with a .434 batting average, and was named league MVP. In 2002, he would be inducted into the CCBL Hall of Fame.

He was an All-American and set the Mississippi State record for batting average in a season by hitting .459 during the 1977 season. He was selected by the New York Yankees in the fifth round of the draft, and spent seven seasons in the Yankees' minor league system where he had a career average of .294 with 17 home runs and 336 RBIs. He never made it to play in the major leagues.

In 1987, he became manager of the minor league Fort Lauderdale Yankees, leading the league with an 85–53 record in his first season. By 1989, Showalter was with the Double-A Albany-Colonie Yankees of the Eastern League, where he was named Minor League Manager of the Year by Baseball America.

In 1990, Showalter was promoted to the coaching staff of the New York Yankees, and eventually succeeded Stump Merrill as the team's manager for the 1992 season. During his four years as the Yankees' manager, the team posted a record of 313–268, finishing first during the strike-shortened season, thereby being named by the Associated Press as the American League Manager of the Year and became the 1995 American League manager for the All-Star Game. The Yankees won the AL wild card in 1995, participating in the playoffs for the first time since 1981. However, they lost to the Seattle Mariners in the Division Series. Following the season, owner George Steinbrenner offered Showalter a new, two-year contract—but demanded that Showalter fire his hitting coach, Rick Down. Showalter was unwilling to do this and resigned. Showalter's ousting was due in part to the playoff loss and other fallout from the strike. It was the second time that the Yankees had forced out their manager in the aftermath of a strike; the Yankees fired Gene Michael after of the 1981 strike. Showalter finished with a regular-season record of 313 wins and 268 losses and a playoff record of two wins and three losses.

During this time period Showalter appeared as himself along with Danny Tartabull in the 1994 Seinfeld television episode "The Chaperone".

In 1996, Showalter was hired by the expansion Arizona Diamondbacks two years before the team was scheduled to begin play in order to take a more active role in developing the eventual roster. In the Diamondbacks' first season (1998), Showalter managed the team to a 65–97 record, but following numerous off-season player acquisitions, which included Randy Johnson, Armando Reynoso, Todd Stottlemyre and Steve Finley, Showalter managed the 1999 team to a 100–62 record and the National League West title, making them the fastest expansion team in MLB history to win a division title. They lost in the NLDS to the New York Mets. After regressing to an 85–77 record in 2000, the Diamondbacks fired Showalter, leaving him with a 3-year record of 250–236. Just as the Yankees did after replacing him, the Diamondbacks won the World Series the following year.

After a few years as an analyst on ESPN, Buck Showalter was hired as manager of the Texas Rangers on October 11, 2002, following a last-place season under manager Jerry Narron. In his first season with the Rangers, Showalter managed the team to a 71–91 record—again in last place; but following the high-profile, off-season trade which sent Alex Rodriguez to the Yankees, Showalter's Rangers jumped out to an early-season record of 17–9 by early May of the 2004 season. The Rangers stayed in playoff contention for most of the season, performing far better than most had predicted. The Rangers failed to make the playoffs, finishing third in the AL West, though Showalter was again named Manager of the Year. In Showalter's 4 years with the Rangers the team failed to finish better than third (of four teams) in the AL West. He was fired as manager on October 4, 2006. He finished his Rangers career with a 319–329 record.

Showalter was hired as a senior advisor to baseball operations for the Cleveland Indians on December 1, 2006, and then returned to ESPN as an analyst, before being appointed to succeed Juan Samuel as manager of the Baltimore Orioles on July 29, 2010. He chose to wear uniform number 26 as a tribute to Johnny Oates. Signed to a contract through the 2013 campaign, he inherited a ballclub with the worst record in the majors at 32–73. In his debut as manager on August 3, the Orioles recorded a 6–3 win over the Los Angeles Angels of Anaheim at Oriole Park, leading to a three-game sweep. The team's first-ever season series sweep of the Angels was completed by the end of the month. The 2010 Orioles won 34 of 57 games played under Showalter, second only to the Phillies during the same stretch. Showalter became the first manager in MLB history to take over a team in August and coach them to more wins for the remainder of a season, than the team previously had before hiring him.

He managed the 1,000th victory of his major-league career in a 7–1 triumph at Yankee Stadium on May 1, 2012. Showalter finished the 2012 season with a .574 winning percentage, winning 93 games, and ending a streak of losing seasons for the Orioles at 14.

Under Showalter, the Orioles reached the postseason for the first time since 1997, defeating the Texas Rangers in the Wild Card game on October 5, 2012. The Orioles were later defeated by the New York Yankees in the 2012 American League Division Series, 3 games to 2. Showalter was named the AL Manager of the Year by The Sporting News. He was re-signed through 2018 with the Orioles.

After finishing out of play-off contention in the 2013 season, Showalter led the 2014 Orioles to the AL East title—the franchise's first in 17 years. The Orioles subsequently swept the Detroit Tigers (3-0) in the ALDS for Showalter's first major league ALDS title, before being swept themselves (4-0) by the Kansas City Royals in the ALCS.

The Orioles finished the 2015 season with an 81–81 record, giving them their fourth consecutive non-losing season. And in 2016, the Orioles finished tied for second in the American League East with an 89–73 record. They made the postseason for the third time in five years, but lost 5–2 in 11 innings to the Toronto Blue Jays during the AL Wild Card game.

On October 3, 2018, days after the Orioles finished with a franchise-worst 115 losses, Showalter's and General Manager Dan Duquette's contracts ran out and they were not extended.

Showalter lives in Dallas, Texas during the off-season.

All content from Kiddle encyclopedia articles (including the article images and facts) can be freely used under Attribution-ShareAlike license, unless stated otherwise. Cite this article:
Buck Showalter Facts for Kids. Kiddle Encyclopedia.