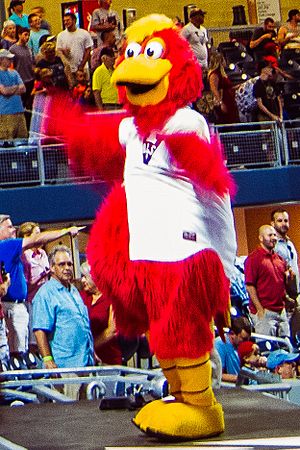 Booster, mascot of the Nashville Sounds

The team is named "Sounds" because Nashville, the city where the team plays, is famous for making Country music. 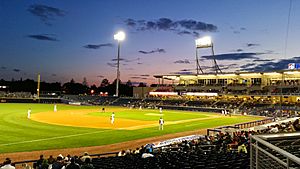 Their first ballpark was Herschel Greer Stadium. There were many changes to it since it was completed in 1978. It has seats for 10,300 spectators. Its best known feature is its giant 115.6 foot (35.2 m) scoreboard which is behind the left field wall. It has the shape of a guitar.

After the construction of new and quite luxurious minor league ballparks, Greer had fallen below standards set for Triple-A stadiums by professional baseball. Therefore there have been several renovations and upgrades to meet the Triple-A standards. Before the 2008 season, more than $1 million in upgrades and repairs were made to the stadium. A new clubhouse was built, the field lighting was improved as well as were the restrooms, walkways, and seating, were made in order to keep the stadium functional for another three to five years.

In 2014, the Sounds and the Nashville Metro Government agreed on a plan to build a new baseball stadium for the team. The Sounds began playing baseball at the new stadium, called First Tennessee Park, in 2015. It has space for 10,000 spectators. There are 8,500 seats, and there is a spot of grass where 1,500 others can sit.

All content from Kiddle encyclopedia articles (including the article images and facts) can be freely used under Attribution-ShareAlike license, unless stated otherwise. Cite this article:
Nashville Sounds Facts for Kids. Kiddle Encyclopedia.