At bat facts for kids 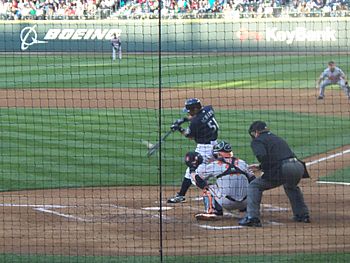 In baseball, an at bat (AB) or time at bat is used for certain statistics. These statistics include batting average, on base percentage, and slugging percentage. It is a more narrow definition of a plate appearance. A batter starts with an at bat every time he faces a pitcher; however, the batter gets "no time at bat" in the following cases:

Section 10.02.a.1 of the official rules of Major League Baseball defines an at bat as: "Number of times batted, except that no time at bat shall be charged when a player: (1) hits a sacrifice bunt or sacrifice fly; (2) is awarded first base on four called balls; (3) is hit by a pitched ball; or (4) is awarded first base because of interference or obstruction..."

An at bat is counted when:

All content from Kiddle encyclopedia articles (including the article images and facts) can be freely used under Attribution-ShareAlike license, unless stated otherwise. Cite this article:
At bat Facts for Kids. Kiddle Encyclopedia.