Washington County is a county located in the northwestern part of the state of Florida, in the Panhandle. As of the 2010 census, the population was 24,935. Its county seat is Chipley. Washington County is a prohibition or entirely dry county, meaning that the sale of alcoholic beverages is banned in the county. 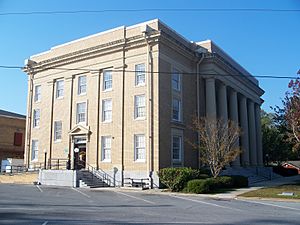 Washington County, Florida was created in 1825, and was nearly twice the size of the State of Delaware, stretching all the way to the Gulf of Mexico. After a century of boundary shifts, the county, with over 382,000 acres (1,546 km2) of rolling hills covered in thick, stately pines and mixed hardwood forests, now covers a large portion of the central Florida Panhandle.

Over a span of more than 150 years, Washington County has seen Native American, Spanish and English cultural influences. The County's historical lore is rich with stories of the exploits of Andrew Jackson. There are numerous Native American Mounds and evidence of strong settlements still being discovered.

Named after George Washington, the first President of the United States of America, the area was first settled by those seeking both economic and political freedom in this frontier land of vast timber and mineral resources. Inland waterway transportation brought about heavy river settlements. The arrival of railroads in the late 1800s boosted economic, social and political developments.

Vernon, the geographical center of the county derives is named for George Washington's Virginia home, Mt. Vernon. The pioneer town was also the site of a major Indian settlement.

The county courthouse was located in Vernon during the early part of this century until a railroad town in northeastern Washington County, Chipley, became the new and present county seat in 1927.

All content from Kiddle encyclopedia articles (including the article images and facts) can be freely used under Attribution-ShareAlike license, unless stated otherwise. Cite this article:
Washington County, Florida Facts for Kids. Kiddle Encyclopedia.