Kids Encyclopedia Facts
This page is about the city. For the documentary film, see Vernon, Florida (film).

Vernon is a city in Washington County, Florida, United States. The population was 743 at the 2000 census; according to the U.S. Census Bureau's 2004 estimates, the city had a population of 757.

The geographical center of Washington County, Florida, Vernon is named for George Washington's Virginia home, Mt. Vernon. The quaint, pioneer town was also the site of a major Indian settlement. Vernon held the county seat until 1927 when the seat was moved to Chipley. The move was approved by a margin of one vote.

Vernon became known as "nub city" in the 1950s and 1960s for a high number of limb loss insurance claims made in the area. Vernon was featured in the Errol Morris documentary film Vernon, Florida (produced in 1981) highlighting the eccentricities of the people who lived there. The movie angered many residents of the city and surrounding areas who felt the documentary portrayed Vernon in a negative light. Morris had originally intended to document on the "Nub City" aspect of the town, but re-focused his subject after claiming to receive death threats from residents. The area's history is exhibited at the Vernon Historical Society Museum in Vernon City Hall. 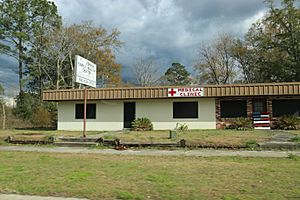 The city sits on the Holmes Creek where during the 1880s the creek was used as a shipping route to Bonifay and other nearby towns. The creek was also used to ship gopher tortoises due to the high value their shell carried at that time. The town gained infamy in the late 1950s and early 1960s due to the improbably high percentage of residents who put out insurance claims on lost limbs, to the point that many speculated that residents of the town were intentionally dismembering themselves for the insurance money. Although there is no real evidence to support these speculations, these insurance claims from Vernon, with a population of 500–800, accounted for as many as 2/3 of claims nationally. The town was referred to as "Nub City".

According to the United States Census Bureau, the city has a total area of 4.7 square miles (12 km2), all land. 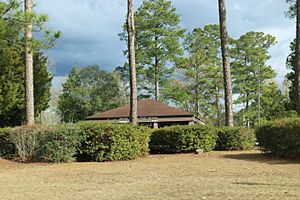 There were 296 households out of which 29.7% had children under the age of 18 living with them, 50.3% were married couples living together, 16.9% had a female householder with no husband present, and 30.4% were non-families. 27.7% of all households were made up of individuals and 16.6% had someone living alone who was 65 years of age or older. The average household size was 2.38 and the average family size was 2.80.

All content from Kiddle encyclopedia articles (including the article images and facts) can be freely used under Attribution-ShareAlike license, unless stated otherwise. Cite this article:
Vernon, Florida Facts for Kids. Kiddle Encyclopedia.