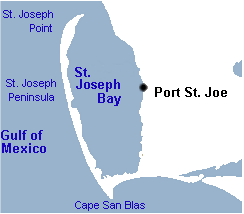 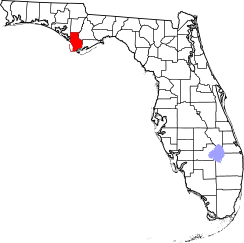 St. Joseph Bay is a bay on the Gulf Coast of the U.S. state of Florida. The bay is located in Gulf County between Apalachicola and Panama City. Port St. Joe is located on St. Joseph Bay.

St. Joseph Bay is bounded on the east by the mainland, on the south by Cape San Blas, and on the west by the St. Joseph Peninsula. The north end of the bay is a relatively narrow opening to the Gulf of Mexico. The bay is approximately 15 miles (24 km) long north to south and 6 miles (9.7 km) wide at its widest point.

The boom town of St. Joseph was founded on the shores of St. Joseph Bay in 1835. The town briefly prospered, but a yellow fever epidemic in 1841 drove most of the residents away and the town was soon abandoned. The St. Joseph Bay Light was established on St. Joseph Point in 1838, to serve the new town's port. The light was discontinued in 1847, after the town had been abandoned, and the unused tower was destroyed in a storm in 1851. A new lighthouse, the St. Joseph Light Range Station, was constructed in 1902 on the mainland across from St. Joseph Point, at Beacon Hill.

A new town, Port St. Joe, was founded a couple of miles north of the site of the old town of St. Joseph around 1910, when the Apalachicola Northern Railroad built a branch line to the Bay.

St. Joseph Bay is known in the area for its abundant scallop habitats. Open-harvest season for bay scallops along Florida's Gulf coast typically runs from July 1 through September 24.

All content from Kiddle encyclopedia articles (including the article images and facts) can be freely used under Attribution-ShareAlike license, unless stated otherwise. Cite this article:
St. Joseph Bay Facts for Kids. Kiddle Encyclopedia.